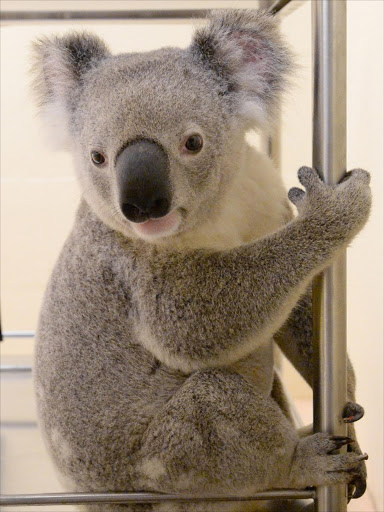 This handout photo taken on July 26, 2014 from the Australia Zoo shows "Timberwolf" the koala in Beerwah, who is lucky to be alive after surviving a terrifying 88-kilometre ride down a busy Australian freeway clinging to the bottom of a car.
Image: BEN BEADEN / AUSTRALIA ZOO / AFP

Timberwolf the koala was lucky to be alive Monday after surviving a terrifying 88-kilometre ride down a busy Australian freeway clinging to the bottom of a car.

The four-year-old male, who survived with nothing more than a torn nail, was struck by the vehicle near Maryborough in Queensland state on Friday.

The Australia Zoo wildlife hospital said it latched onto the bottom of the car as it sped away, with the family inside not knowing they had a marsupial on board.

It was only when they stopped in Gympie after a high-speed freeway drive that they noticed it, and called the hospital for help.

The maximum speed on the freeway is 110 kilometres per hour.

Australia Zoo vet Claude Lacasse said it was amazing the koala, named Timberwolf by the rescuers who brought him in, was in such great health.

"It is absolutely amazing that he has such minor injuries and he survived," Lacasse said.

"It is a truly remarkable story, he is a very lucky koala."

Timberwolf was given pain killers for the torn nail and is recovering in a tree at the zoo north of Brisbane as vets work out exactly where he grabbed hold of the car so they can return him to the wild.

Australia Zoo, set up by television personality and conservationist Steve "Crocodile Hunter" Irwin, treats an average of 70 koalas every month. Approximately 70 percent of its patients are victims of car accidents or domestic pet attacks.

Thought to number in excess of 10 million before British settlers arrived in 1788, there are now believed to be as few as 43,000 koalas left in the wild, though their existence high in the treetops makes them difficult to count.