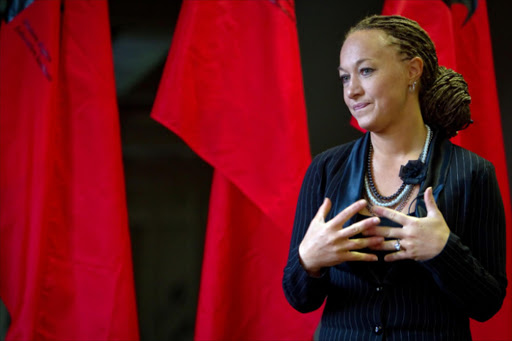 So we all woke up today to be faced with the weirdness that is the Rachel Dolezal story.

If you’re not caught up yet, Rachel is president of the Spokane chapter of the NAACP (The National Association for the Advancement of Colored People) who has apparently been lying about being partially black. Her parents told media recently that this is a lie. The family instead has Czech, Swedish, German and Native American ancestry. A full investigation has been lodged into how she's been fooling everyone for 37 years!

This of course has angered many black people sparking a debate on Twitter this morning. However, some people have decided that instead of getting angry about the issue, we should have a laugh about it. They started a #AskRachel hashtag, much like #AskMmusi a while ago and it is hilarious! Here are 13 of our fave tweets so far. We eagerly await a response from Rachel…

What is this man's job? #AskRachelpic.twitter.com/ZUDZ1FbkmF

Did you ever have these hair struggles? #AskRachelpic.twitter.com/aM96zugpbL

After you finish frying the chicken, what do you do with the left over grease? You on the clock... #AskRachelpic.twitter.com/AfmnPKRV1g

What condition are black folks referring to when they talk about "high-high ?! " #AskRachel

What condition are black folks referring to when they talk about "high-high ?! " #AskRachel

who better you call? a) marquise b) jimmy c) tyrone d) josé #AskRachel

#AskRachel A black person snatches something from you: is it your purse or your edges? pic.twitter.com/A12UtVJwmX

Does she get mad when people try to touch her hair? #askrachel#RachelDolezalpic.twitter.com/92rg4smA2V

#AskRachel According to Destiny's Child, at 11:30pm, what is the club doing?

Is Iggy Azalea your cousin? #AskRachel

Which Aunt Viv was the best? #AskRachel

how many all white parties have you been to? #askrachel

-This article was originally published on Daily Planet.