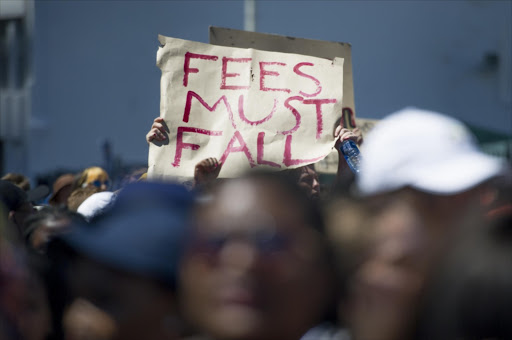 A group of protesters showed their solidarity with the fees must fall movement outside South Africa House in London on Friday.

A spokesman for SA House confirmed that protesters called on High Commissioner Obed Mlaba to come out and sign a memorandum, which he did. Although the protest was largely "in good spirits", said participant Hayley Short, a small group attempted to force their way into the high commission, but UK police intervened.

Mlaba let them know the issue was being dealt with in South Africa by President Jacob Zuma who today announced a 0% increase in fees.

The fairly mixed group of a few hundred protesters included students and professionals from various organisations, including the University of London's School of Oriental and African Studies.

Short said: "It was not political, even though we're all involved in different parties, we were asked not to wear any political party clothing.  We were really united under one umbrella for an issue that's really important for our society. It goes to show that lot of South Africans who live abroad still have an interest in the future of the country."

She noted that a similar protest had been scheduled for New York tomorrow. Should that still go ahead, it might change complexion from a protest to a gathering in celebration of the victory students won today (Fri).

"I think it's high time that the government focuses more on the key sectors. They've not really made education a priority. International relations, tourism, infrastructure development (has) sort of has taken precedence over education… but if you're not educating your people you're not empowering your people and you're not driving economic development and entrepreneurship. Hopefully this is a real eye-opener to the government to really look at  the key basic elements of society," said Short.