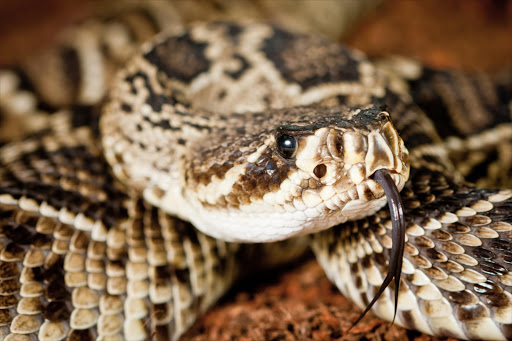 This is not a face you want to kiss - an eastern diamandback rattlesnake.
Image: Gallo Images/ IStock

Ron Reinold of Putnam Country, Florida was apparently trying to kiss a rattlesnake when the serpent took exception to his advances and bit him.

A neighbour, Charles Goff, told reporters from Action News Jax, that his neighbours had been playing with the snake when Reinold decided to try and kiss it.

"Ron was just acting silly, you know?" Goff said. "I guess he said he could kiss the devil and get away with it, but evidently he didn't."

According to CBS it is unclear where the snake came from, as it is illegal to keep rattlesnakes in Florida without a permit.

Reinolds is recovering in hospital, and is expected to survive.

The snake meanwhile is believed to have escaped.

First Coast News reports that authorities believe it was an eastern diamondback rattlesnake, the most dangerous venomous snake in Northern America.

The snake's venom is a potent hemotoxin that kills red blood cells and causes tissue damage, according to National Geographic.

"However, antivenin is widely available throughout the snake's range, and bites rarely result in death," National Geographic reports.

You can hear the 911 dispatch call here: