Merkel may win election, but lose her finance minister 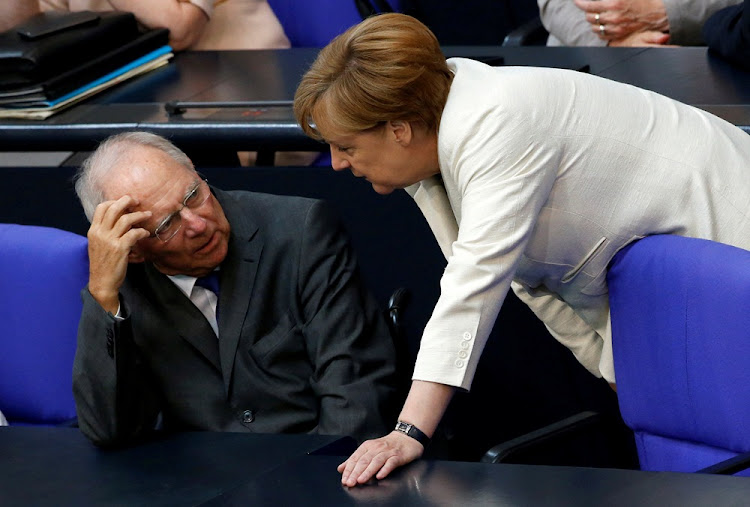 German Finance Minister Wolfgang Schaeuble (L) listens to Chancellor Angela Merkel as they attend a debate on the consequences of the Brexit vote at the lower house of parliament Bundestag in Berlin, Germany, June 28, 2016.
Image: REUTERS/Fabrizio Bensch/File Photo

Wolfgang Schaeuble has won his parliamentary seat a dozen times, survived an attempt on his life and guided Angela Merkel through the euro zone crisis. Now, the German chancellor may have to sacrifice him to secure a coalition deal.

Merkel's conservatives are likely to win a national election on Sept. 24, but lack of an overall majority could force them to continue their alliance with the centre-left Social Democratic Party (SPD).

SPD leaders say their price for a re-run of the current 'grand coalition' would be for Schaeuble to vacate the finance ministry and hand it to them.

Schaeuble personifies the fiscal discipline and financial stability that many Germans crave. But for the SPD he goes too far.

Turkey has refused German lawmakers permission to visit soldiers serving at an air base near the city of Konya, marking a new escalation in tensions ...
News
4 years ago

Germany is awash with tax revenues but France is in a tighter spot. The SPD worries that insistence on French budget discipline will not give Macron the room for manoeuvre to foster growth. If Macron fails, the SPD's concern is the EU will fail or that far-right leader Marine Le Pen could win power.

SPD Foreign Minister Sigmar Gabriel said he had asked Merkel which scenario in her view would be more expensive for Germany: a slightly higher budget deficit in France or Le Pen as president in five years.

"We Germans must change our position," Gabriel said.

Softening Schaeuble's approach to the euro zone would not go down well with many Germans. In his home region of Baden-Wuerttemberg, where hard work and saving is a way of life, he enjoys cult status.

In Schaeuble's view, governments must stop piling up debt so that future policy makers still have some money to spend.

In a wheelchair since a deranged man shot him at an election campaign event a few days after German reunification in 1990, Schaeuble lives for the job and has signalled his willingness to stay in politics.

"I'm ready to continue," he told voters in Sasbachwalden, his home town near the French border.

Schaeuble does not let his disability hold him back.

In May, he flew half way around the world to spend 12 hours in Durban, where he attended several panels at the World Economic Forum on Africa, backed efforts to attract more investment and lectured students on how the EU works.

It is this relentless drive that commands the respect of voters and colleagues alike.

"When I go to breakfasts and party meetings with him, he is the one who is the most aggressive - ready to take on the Social Democrats," a senior German government official said.

But while polls suggest Merkel will win a fourth term in September, she might end up losing Schaeuble as finance minister.

Merkel faces tricky coalition talks over ministerial jobs in the next parliament.

Senior members of the two parties most likely to be her junior coalition partner - the SPD and the business-friendly Free Democrats (FDP) - have made clear that they have their eye on the finance ministry this time.

"The SPD won't repeat the mistake it made during the coalition talks four years ago," Gabriel told reporters.

In 2013, the SPD focussed mainly on domestic issues and pushed for the introduction of a national minimum wage. It consequently got the labour ministry, among other departments such as economic affairs and foreign relations.

Now, the SPD's candidate for chancellor, Martin Schulz, has made investment and solidarity with Europe a cornerstone of his campaign, signalling a less rigid stance on the budget.

If the Social Democrats are forced into another grand coalition under Merkel, it would be "very important" for the SPD to get the finance ministry, a senior SPD source told Reuters.

"If there's one thing we Social Democrats have learned, it's this: We should not enter coalition again without controlling the finance ministry," SPD budget lawmaker Johannes Kahrs told Reuters.

The smaller FDP shares similar thoughts. A senior FDP source said the party was interested in the finance ministry, although it could be more difficult for it to achieve this.

Senior members of Merkel's CDU/CSU conservative bloc acknowledge that she could win the election and still be forced to give up Schaeuble as finance minister.

Eckhardt Rehberg, Merkel's chief budget lawmaker in parliament, said his party would find it hard to keep the finance ministry if the election produced another 'grand coalition' with the SPD - an option both parties have said they dislike.

"Keeping the finance ministry will be most difficult to achieve with the SPD as junior partner because the party has put a strong emphasis on finances and Europe," Rehberg told Reuters.

"If we have a similar situation on election night as we did four years ago, the SPD is likely to demand not only the foreign ministry but also the finance ministry," he added.

It remains unclear whether Merkel will have to sacrifice Schaeuble. But his departure would be a blow for the chancellor's goal of strengthening integration within the EU once Britain leaves, or at least within the euro zone.

For Merkel, deeper integration is a question of sequencing.

This is where Schaeuble could help her: keeping sceptical German voters and lawmakers on board by insisting France and the southern euro zone countries reform first, before agreeing to bind Germany's economic fate closer to theirs.

"If France becomes stronger that would help," said one senior official close to Merkel.