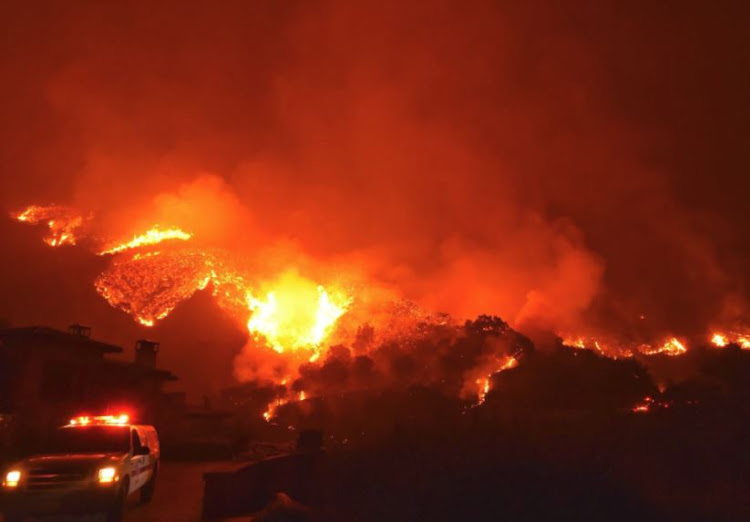 Firefighters grappling with a wildfire that has burned out of control for 10 days on California's scenic coastline, destroying more than 700 homes, sought on Wednesday to defend homes from flames whipped by resurgent Santa Ana winds.

The so-called Thomas Fire, already the state's fifth-largest wildland blaze on record, remained a threat to the communities of Santa Barbara, Carpinteria, Summerland and Montecito as darkness fell and winds picked up, fire officials said.

"Very high fuel loading, critically low fuel moistures, above average temperatures and single-digit relative humidities will continue to support fire growth on the west, east and north sides of the Thomas incident," the California Department of Forestry and Fire Protection said in a statement.

"Firefighters will remain engaged in structure defense operations and scout for opportunities to establish direct perimeter control," the department said.

The Thomas Fire, which broke out on Dec. 4 near the community of Ojai, has traveled 27 miles (43 km), blackening more than 371 square miles (953 square km) in Ventura and Santa Barbara counties, an area larger than New York City.

The conflagration has destroyed 709 single-family homes, damaged 164 others and displaced more than 94,000 people. It was 30 percent contained as of Wednesday evening.

On Tuesday, nearly 8,000 firefighters battling the blaze took advantage of the lighter winds to set controlled burns in a canyon near Carpinteria to deprive the flames of fuel, Cal Fire Captain Steve Concialdi told reporters.

U.S. Representative Julia Brownley, whose congressional district includes Ventura, said on Tuesday the fire could take another week to contain. The efforts have so far cost more than $61 million, according to authorities.

Many public schools in the Santa Barbara area canceled classes this week and will not reopen until the annual winter break is completed in January.

Some of the other fires burning over the past week in San Diego and Los Angeles counties have been largely brought under control.

Investigators determined that the Skirball Fire, which destroyed six homes in Los Angeles' wealthy Bel-Air neighborhood and scorched a building at a winery owned by billionaire media mogul Rupert Murdoch, was started by a cooking fire at a homeless encampment, authorities said on Tuesday.

A massive California wildfire that has already destroyed nearly 800 structures scorched another 56,000 acres on Sunday, making it the fifth largest ...
News
4 years ago

Firefighters in Southern California were under pressure on Saturday to contain six raging wildfires, which have destroyed hundreds of buildings and ...
News
4 years ago