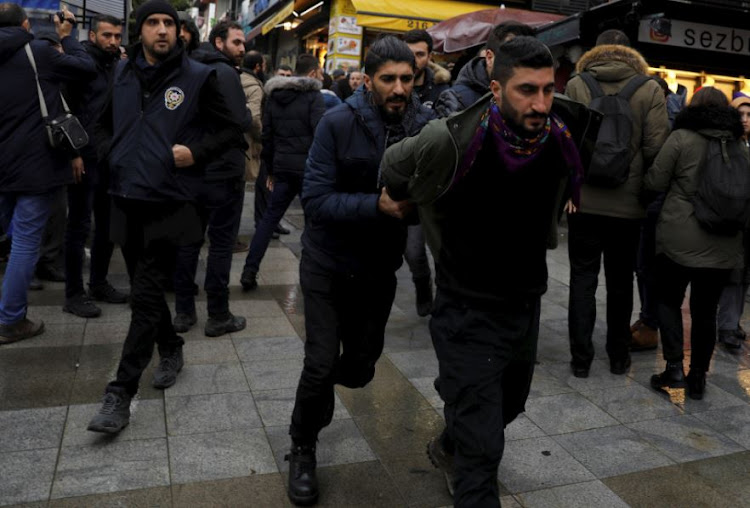 Turkey launched "Operation Olive Branch" over the weekend, pushing into the Afrin region to dislodge the US-backed Syrian Kurdish YPG and opening a new front in the seven-year-old Syrian civil war.

Turkey considers the YPG a terrorist organisation and an extension of the outlawed Kurdistan Workers Party (PKK), which has waged a three-decades-old insurgency in Turkey's largely Kurdish southeast.

President Tayyip Erdogan has overseen a sweeping crackdown since a failed coup in 2016 that critics say has unjustly targeted pro-Kurdish politicians. Leaders of Turkey's largest pro-Kurdish party, the Peoples' Democratic Party (HDP), are in jail on terrorism charges, which they deny.

The interior ministry did not give details on the arrests. However, state-run Anadolu news agency earlier said prosecutors in the southeastern city of Diyarbakir had issued arrest warrants for 17 people who shared material "to provoke citizens of Kurdish origin and encourage them to go into the streets".

Police seized a pump-action rifle, a pistol and ammunition in related raids in Diyarbakir, Anadolu said.

The moves come after Turkish police used pepper gas to disperse pro-Kurdish protesters in Ankara and Istanbul on Sunday, detaining at least 12 people.

Authorities were also investigating social media posts about the military operation allegedly made by two HDP lawmakers, including a post from the party's spokesman, Ayhan Bilgen, Anadolu said.

It said Bilgen was being investigated for allegedly stirring enmity and hatred for tweeting that Ankara's attack on Afrin could lead to civil war.

"An operation by Turkey against Afrin, without there being an attack from there, will lead the country towards civil war if it is successful and will lay the groundwork for a coup if it is unsuccessful," he said on Twitter on January 13.

Erdogan on Sunday warned supporters of the HDP, parliament's third-largest party, not to demonstrate against the military operation, saying security forces would be "on their necks" if they did.

More than 50,000 people have been arrested since the failed coup in July 2016, and 150,000 have been sacked or suspended from their jobs. The government says the moves were necessary given the security threats Turkey faces.

Freedom House, a Washington-based watchdog, downgraded Turkey to "not free" from "partly free" in an annual report this month.

Turkey said on Wednesday it would not hesitate to take action in Syria's Afrin district and other areas unless the United States withdrew support for ...
News
4 years ago

US Secretary of State Rex Tillerson on Wednesday denied that the United States had any intention to build a Syria-Turkey border force, saying the ...
News
4 years ago