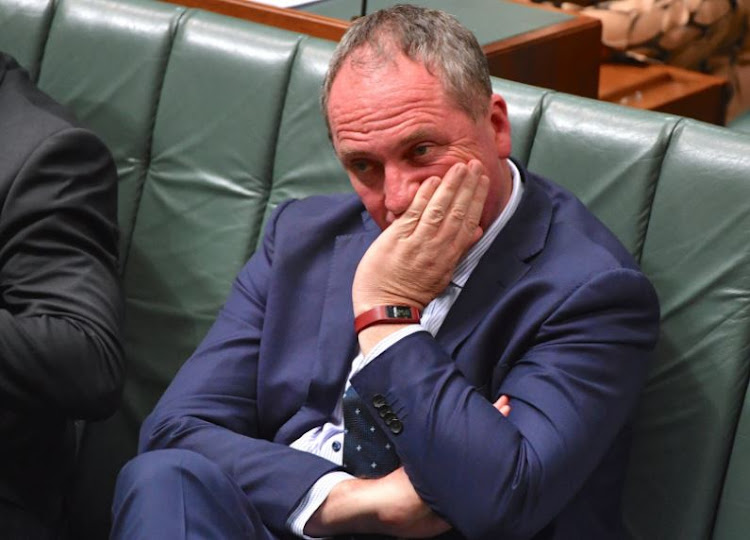 Australia's Deputy Prime Minister Barnaby Joyce said on Tuesday that he did not break any parliamentary rules while conducting an extramarital affair with a former staffer as he faced down calls for his resignation.

Joyce, a practicing Catholic who has campaigned on "family values" and has been married for 24 years, is expecting a child with his former press secretary Vikki Campion.

Joyce is under immense pressure for failing to declare his relationship with his former staffer when she was given two highly paid positions working for the ruling coalition government.

Australia's ministerial code of conduct requires lawmakers to declare relationships with any staff member of a cabinet minister. Joyce said he did not break any rules because Campion was not his "partner" at the time.

The scandal could have major repercussions for Australia's centre-right government. If Joyce does resign from parliament, Prime Minister Malcolm Turnbull will lose his razor-thin one seat majority in parliament.

Joyce said in a later emailed statement that a friendship developed with Campion after she joined his staff and that "became, over time, more" without specifying when the affair started.

He also attempted to shield Turnbull from the fallout, saying he did not discuss Campion's employment changes with the prime minister.

Although Joyce's explanation may see him avoid any official rebuke, his account is unlikely to win favour with the government's traditional conservative voters on whom the deputy PM's future now rest.

"It will depend on what the court of public opinion makes of all of this. If there is a dramatic find in the opinion polls then it could be that he has to resign," said Nick Economou, senior lecturer in Australian politics at Monash University in Melbourne.

Even if Joyce survives, the scandal will likely tarnish Turnbull's re-election prospects with conservative voters in a national election just over a year away.

Joyce has for a week sought to bat away questions of his relationship with Campion, insisting it was not in the public interest. But speaking publicly for the first time, Joyce apologised to his estranged wife and four adult daughters.

"I deeply regret the failure of my 24-year marriage, the tremendous hurt caused to Natalie and our four daughters and the unwanted public intrusion into what is an intensely private matter for all of us," he said in a statement.