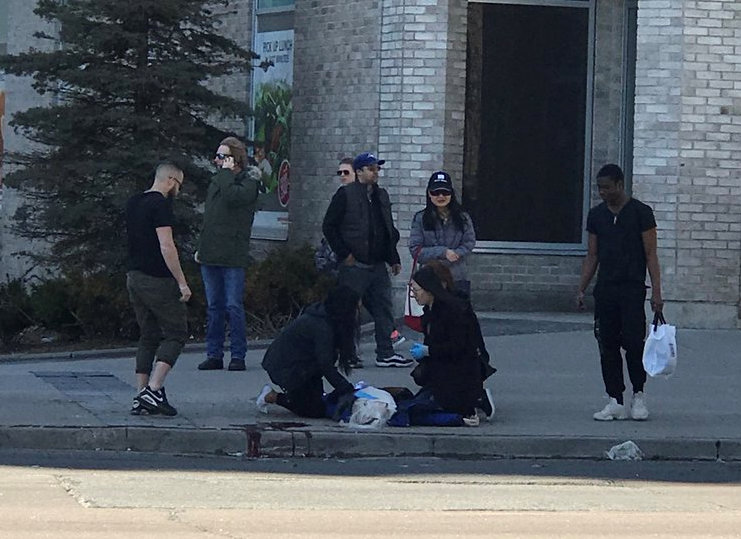 A victim is helped by pedestrians after a van hit multiple people at a major intersection in Toronto, Canada April 23, 2018, in this picture obtained by REUTERS

A white van killed at least two people on a suburban Toronto sidewalk on Monday after jumping the curb and the driver was in custody, according to police and a Reuters witness.

Police in Canada’s largest city initially said eight to 10 people had been injured but later said it was unclear exactly how many had been hurt or the extent of their injuries.

Collision, numerous pedestrians have been struck by a white van on Yonge St and Finch area. further when I get more. #GO725711 ^gl

A Reuters witness said there were at least two bodies at the site of the incident.

It was not immediately clear if the incident was a deliberate act by the driver or a traffic mishap. It occurred at lunchtime on a sunny day and the sidewalks of the mixed commercial and residential area were full of pedestrians.

“Too early to confirm the number of pedestrians struck or their injuries,” police said on Twitter.

Police were called just before 1:30 p.m. (1730 GMT) to the corner of Yonge Street and Finch Avenue in the north end of the city, where a van drove onto the sidewalk and hit multiple people, said Toronto Police spokeswoman Meaghan Gray.

Buildings and workplaces in the area were locked down, and a nearby subway station was closed and service suspended.

The incident happened about 30 kilometres from downtown, where the Group of Seven foreign ministers of industrialized nations, including Canada, the United States, Britain, France, Germany, Italy, and Japan were meeting on Monday. There was no noticeable change in security around the Intercontinental Hotel where the ministers gathered.

“We’re still gathering information and as soon as we can, we’ll share more information with Canadians,” Trudeau told reporters about an hour after news of the incident broke.

The United States and Europe have seen a string of deadly attacks in which vehicles were used to mow down pedestrians, including an Oct. 31 attack in New York that killed eight.

“Everyone was running all over the place,” Taeb said.

Foreign ministers from the Group of Seven industrialized nations were united in opposing Russia's destabilizing behavior while agreeing to leave the ...
News
3 years ago

Shocking footage from a motorcyclist's helmet camera shows the moment he jogs away from a multi-vehicle crash in Texas in the United States.
News
3 years ago