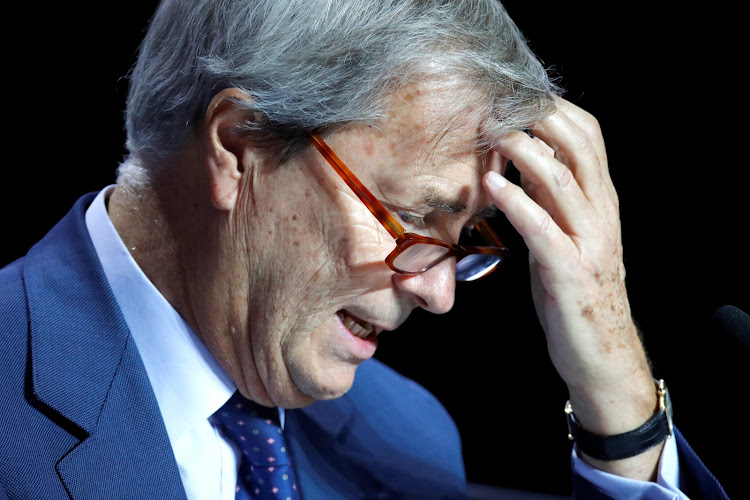 Shares in holding company Groupe Bollore SA fell as much as 8% on the news of his interrogation, while shares in Vivendi, in which the company holds a 20.5% stake, also fell around 1%.

Bollore, whose sprawling logistics empire is a corporate powerhouse in former French colonies across West Africa, is suspected of corrupting foreign public officials and complicity in corruption, his lawyer said. He denied any wrongdoing by Bollore.

"He's indeed being questioned as we speak," Olivier Baratelli said.

Groupe Bollore confirmed in a statement its African business interests were under investigation and said the probe related to the billing for work carried out in Guinea and Togo between 2009 and 2010 by its communications business Havas Worldwide.

It added it would cooperate with the investigation and denied any wrongdoing.

The questioning of Bollore is a sign French authorities are stepping up their years-long investigation, and are prepared to take on one of France's wealthiest individuals who built a reputation as a corporate raider.

Bollore has a net worth of $7.3 billion, according to Forbes.

Weekly business magazine Challenges reported two weeks ago that Bollore had been summoned by judges investigating whether Havas was involved in influencing elections in West Africa.

The probe involves two separate cases, one in Guinea and the other in Togo. The French judges are examining whether Havas supported the electoral campaigns of candidates who once in office granted port concessions to Bollore's group, the magazine said.

"The link that some are trying to make between the winning of these concessions and the communication operations has no business logic and reveals a total lack of understanding of this industrial sector," Groupe Bollore said.

A spokesman for the Guinea government, Damantang Albert Camara, told Reuters by telephone "the port concession obtained by Bollore in Guinea was in strict compliance with the laws in force."

Bollore's legal woes add another challenge to his son Yannick, who the Vivendi board anointed as chairman after Bollore stepped down last week and who still heads Havas.

Vincent Bollore remains the owner of Groupe Bollore. A source close to Bollore said his departure as Vivendi chairman was not related to the investigation.

The latest twist in the investigation in Groupe Bollore's role in the election campaigns comes after British consultancy firm Cambridge Analytica came under fire its role in Britain's Brexit referendum campaign and other national votes, including in East Africa.

Police have up to 48 hours to investigate Bollore, after which a judge may be asked whether there are grounds for a formal investigation to be launched - the next step towards a possible trial.

Havas was integrated into Vivendi last year. Vivendi did not respond to calls seeking comment.

Groupe Bollore had revenues of 18.3 billion euros ($22.3 billion) in 2017 according to Thomson Reuters data.

The group has invested more than 3 billion euros in African ports over the past 10 years, it says on its website.

He said the group was awarded Guinea's Conakry container port concession in March 2011 after GETMA, a private logistics company set up in Guinea in 1979, which initially won the contract, failed to meet its contractual commitments.

Bollore group then won the contract as next best candidate, Baratelli said, adding French prosecutors had already dropped an investigation into how it won the tender in the summer of 2011.

"The award of these two port concessions to Bollore Group is perfectly lawful," he said.

A custody battle in one of the world’s costliest divorces is playing out in Dubai with the former spouses fighting for control over a $540 million ...
News
3 years ago