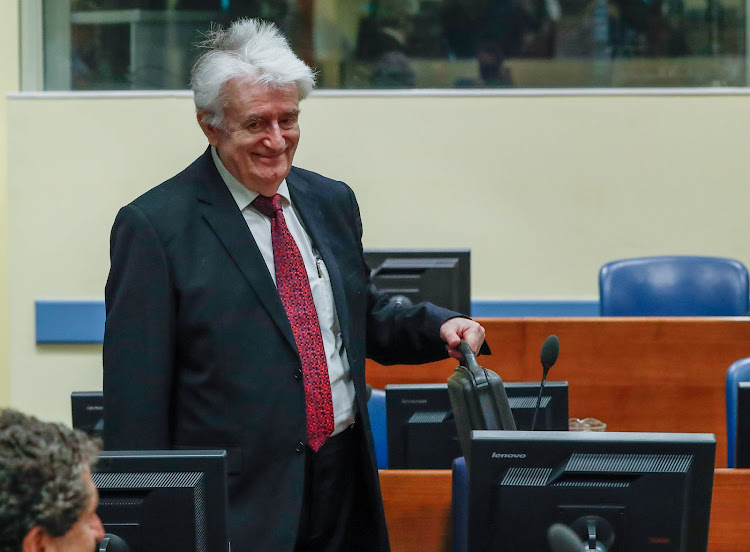 Former Bosnian Serb leader Radovan Karadzic appears in a courtroom before the International Residual Mechanism for Criminal Tribunals (MICT), which is handling outstanding war crimes cases for the Balkans and Rwanda, in The Hague, Netherlands, April 23, 2018.
Image: REUTERS/Yves Herman/Pool

Prosecutors appealed to a United Nations court in the Hague on Tuesday to convict former Bosnian Serb leader Radovan Karadzic of genocide for the killing of Croats and Muslims across Bosnia during the 1992-95 war.

They also appealed to the judges to increase the 40-year prison sentence handed to him on 10 other genocide counts to life behind bars.

Karadzic, 72, was found guilty of genocide in May 2016 from 10 counts of war crimes, including the siege of Sarajevo and the 1995 Srebrenica massacre in which about 8,000 Bosnian Muslim men and boys were killed by Bosnian Serb forces.

But that court acquitted him on a charge of genocide related to attacks for pursuing the destruction of Muslim and Croat populations in other parts of Bosnia.

Karadzic's appeal against the conviction opened on Monday at the International Residual Mechanism for Criminal Tribunals (MICT), which took over cases from a UN court for the former Yugoslavia when it closed last year. He asked for a retrial.

Prosecutors on Tuesday appealed his acquittal on the 11th count, saying he should face an additional genocide conviction.

They said in their opening statement that Karadzic, who insists he is innocent, played an "essential and leading role" in atrocities.

"(Karadzic) abused his immense power to spill the blood of countless victims. Justice requires that he receive the highest possible sentence, a life sentence," Katrina Gustafson told the judges.

Karadzic, the political leader of the breakaway Bosnian Serb Republic during the war, told the court: "Nothing that is alleged in these proceedings is true."

He said the Bosnian Serbs had acted defensively in the war.

The original trial judges had ruled that prosecutors fell short of the proving genocide, which would have required showing an intent to destroy Muslim and Croat populations, rather than merely slaughtering many to drive them out.

In their appeals arguments, prosecutors insisted that Karadzic knew the levels of violence needed to carry out "ethnic cleansing" policies amounted to genocide.

"Karadzic and his associates knew that they would need to spill rivers of blood to carve out the ethnically-cleansed territories they sought and embraced this bloody path," Gustafson said.

A verdict is expected by the end of the year.