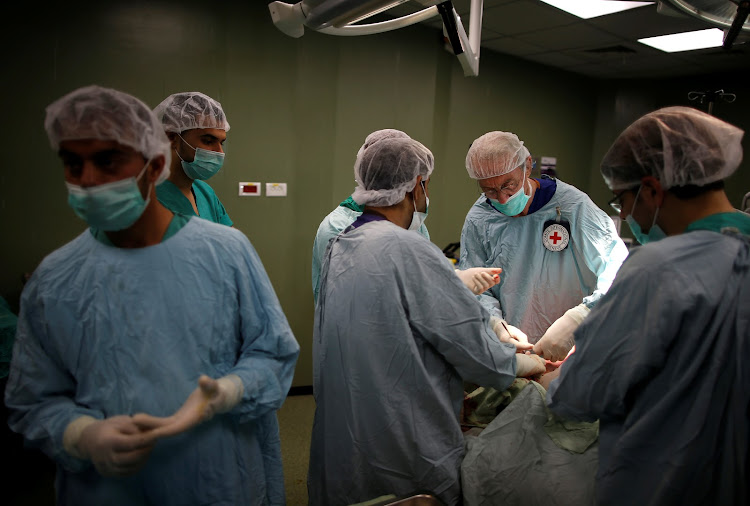 British vascular surgeon John Wolfe, who was invited to Gaza by the International Committee of the Red Cross (ICRC), performs a surgery for a wounded Palestinian in the operating room in a hospital in Gaza City April 25, 2018.
Image: REUTERS/Suhaib Salem

Doctors are on a particularly tight schedule at Gaza's largest hospital when it comes to treating Palestinians wounded by Israeli army bullets at Friday protests along the border.

Many of the injured rushed to Shifa hospital have to be discharged by Thursday, a day before the next mass demonstration, to make room for a new round of wounded.

At the facility on Wednesday, two foreign surgeons, contracted by the International Committee of the Red Cross (ICRC), joined their Palestinian colleagues in tending the injured in multiple operating rooms.

"We have different teams operating on arterial problems in seven theatres at the same time. That meant it was much quicker, much more efficient, and it was very effective," said British vascular surgeon John Wolfe.

But the frequent power outages that have long plagued Gaza mean that, at times, doctors briefly have to operate by the light from cellphones before emergency generators kick in.

Wolfe, a consultant at St Mary’s Hospital in London, where Prince William's wife Kate gave birth on Monday, is on his sixth visit to Gaza since 2016. He helps train local doctors in treating catastrophic bleeding.

Palestinian health officials said 38 people, including three youngsters, had been killed by Israeli fire and at least 1,700 wounded by live ammunition since the protests began on March 30 for refugees and their descendants to have a right to return to homes in what is now Israel.

Israeli troops shot dead two Palestinians and wounded 12 in renewed unrest on the Gaza-Israel border on Friday as a series of protests in the enclave ...
News
3 years ago

Israel’s use of live fire has drawn international criticism but the government says it is protecting its borders and takes such action only when protesters, some hurling stones and rolling burning tyres, come too close to the fence.

Tayseer Al-Tanna, deputy head of the vascular department at Shifa hospital, which has received around 750 people with bullet wounds, said most were shot in or near the knee.

He said the bullets tore up muscles, smashed bones and slashed veins.

"Such injuries could have required amputations but we have been able to save many cases," Tanna said.

Slobodan Mirosavljev, a visiting surgeon from Serbia, said Palestinian medical personnel had coped well with a situation that would have been "overwhelming for any health facility in any country".

So far, 18 cases have required amputations, a number that Mirosavljev said was relatively low.

"That means that the vascular team first, and then orthopaedic, did a good job."

The protests are due to culminate on May 15, when Hamas leader Ismail Haniyeh says the Gaza scenes will be replicated elsewhere on Israel’s frontiers.