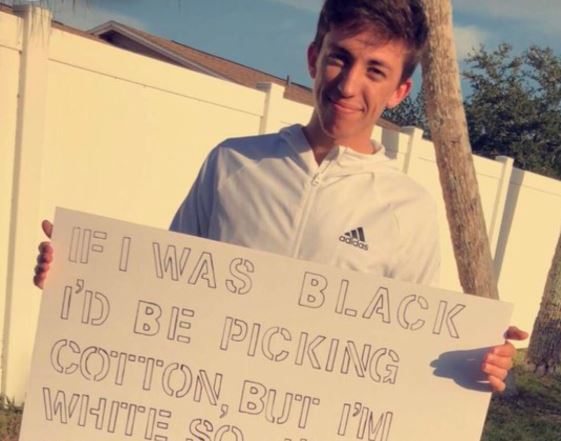 A Florida teenager has apologised for the sign he used to ask a girl to be his date.
Image: Twitter/@MartyBoi91

A Florida teen has apologised after a photo of him holding a racist sign he used to ask a girl out to a dance went viral.

Noah Crowley’s prom proposal sign read: “If I was black, I’d be picking cotton, but I’m white so I’m picking u 4 prom.”

Come on Noah. We have to do better than this. This is why racism is still a thing, “let me see what I can get away with”. Smh. #noahcrowley #lowkeyracism pic.twitter.com/tXvnEtcey9

18-year-old's girlfriend took a photo of the sign for her Snapchat and added two ‘heart-eye’ emojis. Needless to say, people were outraged:

Why did she 😍😍 the photo, she's equally as bad for thinking this is cute and sweet. Ignorance

This photo was taken in 2018. Not only did the teen in the photo think this was okay but the girl who posted it put a caption on it with “😍😍”. I only hope that every time a future employer googles this person’s name this is the first picture they find. #NoahCrowley From Florida pic.twitter.com/LQdEFE2y8Q

Gosh, if only we had someone in a leadership position over our public education system who could jump on racism in #Sarasota schools. Someone who has the pulse of the system and the community, and the power to engage and lead.

Crowley, a pupil at Riverview High School in Sarasota, has reportedly apologised for his actions, which are now being investigated by the school.

Sarasota County School District Communications Director Tracey Beeker told NBC News the teen “made an error in judgment” and he has apologised for the post. Crowley's parents have said he will not be attending the dance or graduation.

"Neither the school district nor Riverview High School condones or supports the message conveyed in the post," the school said in a statement.

Trevor Harvey, president of the Sarasota County Branch of the NAACP told ABC Action News 10 he will recommend to the school district that Crowley not return to any school in Sarasota. He is also calling for an investigation into the school administration.

This incident comes in the wake of the Starbucks controversy where two black men were arrested at a store in Philadelphia. The incident led Starbucks to announce that they would close more than 8,000 stores on May 29 for anti-bias training.

Charlize Theron on racism in the US: I wouldn't travel with my kids to some parts of America

Will Charlize leave America because of racism? She said the thought has crossed her mind.
TshisaLIVE
3 years ago

Investec chairman Fani Titi told the Randburg Magistrate's Court on Monday that his long-term friend Peter-Paul Ngwenya had threatened to kill him‚ ...
News
3 years ago

In the wake of outrage over the arrest of two black men in a Starbucks in Philadelphia, another video has surfaced that once again has the chain's ...
News
3 years ago

Starbucks has apologised after two black men were arrested in one of their Philadelphia  coffee shops - for doing nothing.
News
3 years ago

Police have launched an investigation after a customer found a hidden camera inside a restroom at an Atlanta Starbucks location.
News
3 years ago