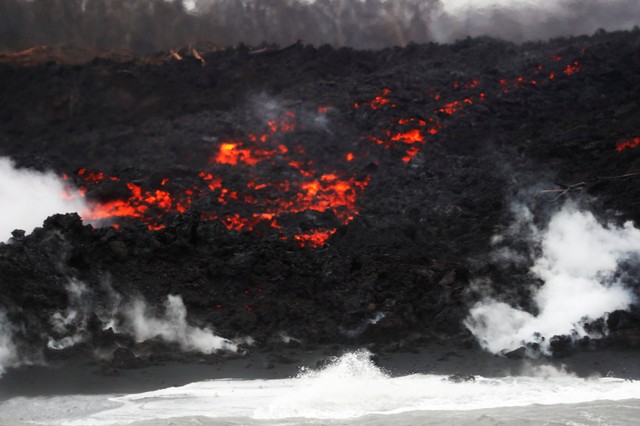 After crossing Highway 137, lava pours into the ocean during the eruption of the Kilauea Volcano near Pahoa, Hawaii, US, May 24, 2018.
Image: REUTERS/Marco Garcia

A third lava flow from Hawaii's erupting Kilauea volcano streamed into the ocean on Thursday as US Marine Corps helicopters stood by to evacuate a Big Island community should molten rock or huge cracks block its final escape route.

Six huge fissures sent rivers of molten rock through a blackened, volcanic wilderness that was once jungle, farmland and rural homes.

Kilauea, one of the world's most active volcanoes, entered the fourth week of what may be an unprecedented, simultaneous eruption at its summit crater and along a six-mile (9.7-km) string of fissures 25 miles (40 km) down its east flank. At about 6 p.m. local time on Thursday, the volcano erupted at its summit, sending ash 10,000 feet (3000 m) into the air. The wind may carry ash to the southwest toward the Pahala area, the Hawaiian Volcano Observatory said.

At least 50 rural homes and other structures have been destroyed by lava from fissures in a small area of the Big Island. Some 2,000 people have faced mandatory evacuations and another 2,000 in coastal communities may be forced to leave their homes if State Highway 130, their last exit, becomes blocked.

The U.S. Marine Corps deployed two CH-53E Super Stallion helicopters to Hilo, about 24 miles north (39 miles), in support of a task force standing by in case an air evacuation is needed. Each helicopter can carry up to 50 people at a time.

A stream of lava blocked a Hawaii highway on Sunday that serves as an escape route for coastal residents, while the first known serious injury was ...
News
4 years ago

"We now have the capacity to evacuate all of the estimated population of lower Puna south of the lava flow within a few hours," Brigadier General Kenneth Hara of the Hawaii National Guard said in a statement.

Road crews dumped material into cracks on the road and covered them with steel plates in an effort to keep the highway open.

"Talks and discussions have been underway for possible air evacuations if it did come to that," Tim Sakahara, Hawaii Department of Transportation, told reporters in a conference call.

Up at Kilauea's 4,091-foot (1,246-meter) summit, at least 12 explosions a day on average are pumping ash plumes thousands of feet (meters) into the sky. Ash drifted up to 26 miles (42 km)southwest to dust the black sands of Punaluu beach with gray powder before blowing out to sea.

Down on the east flank of the volcano, six fissures re-erupted in lava fountains, as volcanic activity moved west towards Highway 130.

Geologists said that after three weeks of escalating activity, Kilauea volcano has entered a "steady state" of eruption.

"It's probably going to do this for a little while longer," said U.S. Geological Survey scientist Wendy Stovall on the conference call, describing the stage of the eruption as the "middle" or "kind of the steady state."

While a roughly 10-square-mile (26-sq-km) area of the Puna district has been ravaged, authorities stressed the eruption was having limited effects on the Connecticut-sized island that is a major tourist destination.

Norwegian Cruise Line said it would reinstate port calls to the island's two largest cities, Kona and Hilo, after cancelling them in recent weeks. Crystal Symphony cruises also said it planned to return to the two ports after cancelling a Wednesday Hilo stop due to "an abundance of caution."

Lava flowing from giant rips in the earth on the flank of Hawaii's erupting Kilauea volcano threatened highways on Monday, raising the possibility ...
News
4 years ago

Emergency crews said they were poised to evacuate more people as fissures kept spreading from Hawaii’s erupting Kilauea volcano, five days after it ...
News
4 years ago