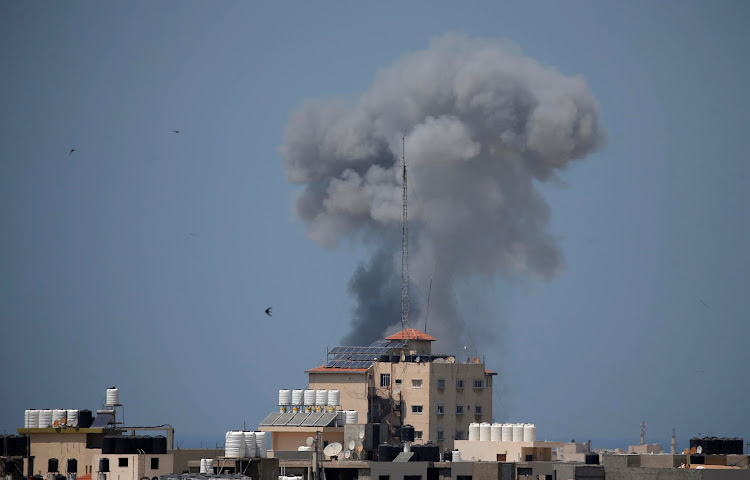 Palestinian militants launched on Tuesday their heaviest barrages against Israel since the 2014 Gaza war and Israeli aircraft struck back in a surge of fighting after weeks of border violence.

At least three Israelis were wounded by shrapnel, health officials said, after several dozen mortar bombs and rockets were fired from the Gaza Strip, triggering warning sirens in southern Israel throughout the day. There were no immediate reports of Palestinian casualties.

Israel has long said it would not tolerate such attacks, and its warplanes hit more than 30 targets belonging to armed groups, including a cross-border tunnel under construction, the military said. It accused Gaza’s dominant Hamas movement and the Iranian-backed Islamic Jihad group of launching the salvoes.

There was no immediate claim of responsibility for the barrages, which came after Islamic Jihad vowed to take revenge for the killing of three of its members on Sunday by Israeli tank shelling.

Lieutenant-Colonel Jonathan Conricus, a spokesman for the Israel Defense Forces (IDF), said the most extensive strikes from Gaza since the seven-week war in 2014 also drew “the largest IDF retaliatory attack” since then.

The Israeli military said more than 25 projectiles were fired on Tuesday. Several were shot down by its Iron Dome rocket interceptor while others landed in empty lots and farmland.

One exploded in the yard of a kindergarten, damaging its walls and scattering the playground with debris and shrapnel, about an hour before it was scheduled to open for the day.

Violence has soared along the Gaza frontier in recent weeks during which 116 Palestinians were killed by Israeli fire at mass demonstrations calling for Palestinians’ right to return to ancestral lands now in Israel.

A Hamas spokesman defended Tuesday’s attacks as a “natural response to Israeli crimes“. An Islamic Jihad spokesman said “the blood of our people is not cheap“.

Plumes of smoke and dust rose from the sites hit in the Israeli air strikes. The powerful explosions shook buildings nearby, causing panic among rush hour crowds on streets and in markets. The Gazan Ministry of Education said shrapnel from one missile flew into a school.

Nickolay Mladenov, the UN’s special coordinator for the Middle East peace process, said he was deeply concerned by “the indiscriminate firing of rockets by Palestinian militants from Gaza towards communities in southern Israel”.

Amid international condemnation for its use of lethal force at the mass demonstrations that began on March 30, Israel said many of the dead were militants and that the army was repelling attacks on the border fence. Palestinians and their supporters say most of the protesters were unarmed civilians and Israel was using excessive force against them.

Organisers of the Palestinian border protests launched a boat from Gaza on Tuesday in a challenge to Israel’s maritime blockade of the enclave.

“I want to make a future for myself, I want to live,” said Ehab Abu Armana, 28, before he and 14 other protesters boarded the boat. The Israeli military said it would not allow the vessel to break the blockade, but hours after it set off gave no details about whether it had been intercepted.

More than two million Palestinians are packed into the narrow coastal enclave. Israel withdrew its troops and settlers from Gaza in 2005 but, citing security concerns, maintains tight control of its land and sea borders, which has reduced its economy to a state of collapse.

Egypt also restricts movement in and out of Gaza on its border.

Palestinian President Mahmoud Abbas is suffering from a lung infection and could remain in hospital for several days, Palestinian medics and ...
News
3 years ago