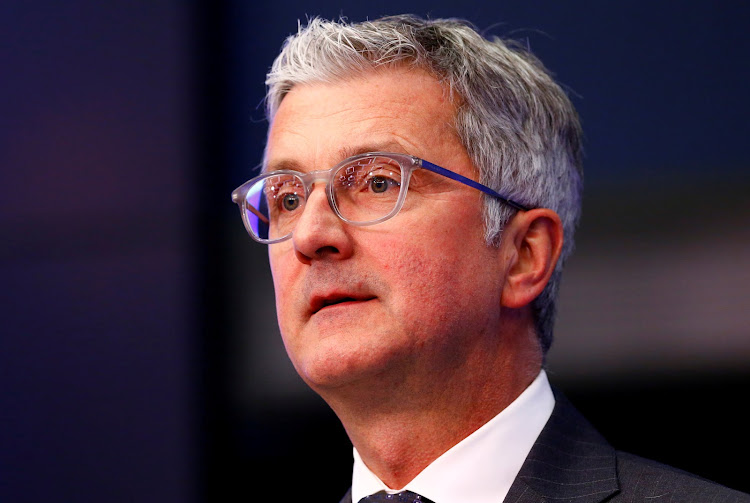 Suspended Audi CEO and Chairman of the Board of Management Rupert Stadler has been replaced by interim CEO sales executive Abraham Schot
Image: REUTERS/Denis Balibouse/File Photo

Volkswagen suspended Audi boss Rupert Stadler and announced an interim replacement on Tuesday, seeking to steady its most profitable business after German authorities arrested Stadler as part of an emissions probe.

Audi said Stadler, 55, had requested to temporarily step down from his position, and named sales executive Abraham Schot as an interim replacement with immediate effect.

Stadler's arrest has thrown Volkswagen (VW) back into turmoil almost three years after it admitted to using illegal software to cheat US emissions tests on diesel engines.

Analysts said the arrest raised questions about whether Europe's biggest carmaker had done enough to reform in the wake of the crisis, and that it threatened a delicate truce among the group's powerful stakeholders, who had previously clashed about whether Stadler should remain in power.

Schot joined the VW group in 2011 after having worked as president and CEO of Mercedes-Benz Italia. He has been Audi board member for sales and marketing since last September.

Munich prosecutors arrested Stadler at his home in Ingolstadt in the early hours of Monday, saying they saw a risk he could try to suppress evidence. Prosecutors tapped his phone, a person familiar with the investigation said.

He remains remanded in custody in Augsburg, but has not been charged with a crime.

VW and Audi said on Monday that Stadler was presumed innocent unless proven otherwise.

Last week, Munich prosecutors said they were investigating Stadler for suspected fraud and false advertising and for his alleged role in helping to bring cars equipped with illegal software on to the European market.

VW has set aside around $30-billion to cover the cost of fines, vehicle refits and lawsuits arising from its "dieselgate" scandal, and is spending billions more on electric vehicles to try to rebuild its reputation.

VW has for years said only lower-level managers knew of the emissions cheating. However, US authorities filed criminal charges against former VW boss Martin Winterkorn earlier this year, and German prosecutors continue to investigate.

The technique of using software to detect a pollution test procedure, and to increase the effectiveness of emissions filters to mask pollution levels during tests, was first developed at Audi.

"In designing the defeat device, VW engineers borrowed the original concept of the dual-mode, emissions cycle-beating software from Audi," VW said in its plea agreement with U.S. authorities in January 2017, in which the company agreed to pay a $4.3-billion fine to reach a settlement with US regulators.

Stadler has been under fire from the media, politicians and VW's powerful trade unions for his handling of the scandal, but he survived a management reshuffle announced in August thanks to backing from the Piech and Porsche families that control VW.

Peter Mosch, deputy chairman on Audi's supervisory board and head of its works council, said labour representatives had backed a move to appoint Schot as interim CEO to ensure that Audi's business did not suffer from the leadership crisis.

"For the employees it is now important that the interim CEO returns the company to calmer waters, drives the (diesel) investigation and brings it to a conclusion, but mostly keeps the day-to-day business in view," he said in a statement.

AfriForum Youth says it has sent a letter to Volkswagen (VW) SA regarding a recent advertisement in which VW encourages young people of colour to ...
Politics
4 years ago

A Lamborghini‚ McLaren‚ BMW M3 and Johannesburg Metro Police (JMPD) vehicle were involved in two collisions at the weekend.
News
4 years ago