WATCH | Man crashes plane into own home with family inside 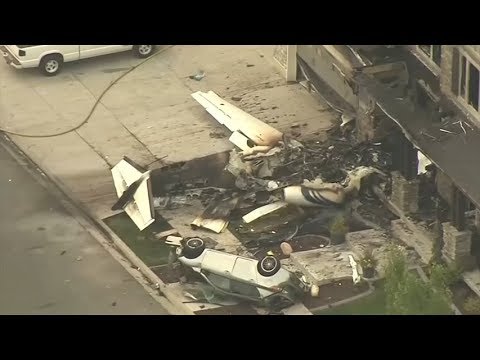 A pilot was killed in Utah on Monday morning when he crashed his plane into the home where his wife and son were staying - only hours after being arrested for domestic violence.

Duane Youd, 47, died at the scene in Payson, while his wife and son escaped without injury.

Sergeant Spencer Cannon of the Utah County Sheriff's Office told Fox13 that Youd was arrested on Sunday evening for assaulting his wife. Witnesses say he punched her and dragged her at various points during the assault. He then leaped into his bakkie to escape, only for the woman to jump onto the back. Police say he drove erratically until he was finally pulled over and arrested.

However, a few hours after making bail, the pilot took off from Spanish Fork Airport in a twin-engine Cessna 525 belonging to his employer - and crashed into his own home.

A video posted to Facebook shows the airplane flying low before it impacts the home and a fireball erupts, and another shows a fireball engulfing the home.

My cameras caught that plane crash this morning in Payson. Sad stuff.

The plane was destroyed. The motive for the incident remains unclear.

Sergeant Noemi Sandoval of the Payson Police Department told KSL-5 TV that Youd clipped a shed and power lines on his descent into the home, which police believe may have altered his trajectory.

This is not the first time a stolen plane has caused havoc in the United States this week.

On Friday, two F-15 fighter jets were forced to chase a Horizon plane that Seattle airport baggage handler Richard Russell had hijacked. During the hour he spent in the air, Russell flew the plane in a loop — an improbable stunt caught on video by a surprised bystander — then slammed it into the small, heavily forested Ketron Island in Puget Sound.

Authorities have ruled out any link to terror, and determined Russell had flown alone.