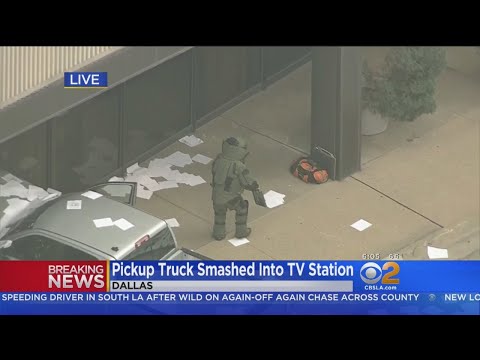 A man was arrested after repeatedly crashing his truck into a building housing a Texas television station on Wednesday morning, according to a report by Dallas Fox 4 News, the target of the incident.

After crashing into the building, the man got out of the truck and began to rant, the station said. No one was hurt.

Dallas police did not immediately respond to a request for comment.

Live television images showed a silver pickup truck, with its hood smashed, at the front of the Fox 4 building, surrounded by the wreckage of the building's large glass-paneled walls. Loose paper littered the street and sidewalk.

"He's in custody now but the bomb squad is on its way," the station said on Twitter. "Most have been evacuated & a few are working to keep the news on air from a secure location."

A still photo posted by the station showed a middle-aged white man dressed in shorts sitting on the ground next to the vehicle, flanked by two uniformed police officers. It was not immediately clear if that man was the suspect.

The building was largely evacuated as police investigated a suspicious bag, the station said. The motivation for the incident was not immediately clear.

The episode comes less than a week after federal authorities charged a California man with threatening to kill Boston Globe employees for the newspaper's role in leading an effort earlier this month by hundreds of US news organisations to defend press freedoms against attacks by President Donald Trump.