New footage has emerged of last week's tsunami striking the Indonesian city of Palu. The footage, shot by a social media user, shows a wall of muddy water sweeping through the streets and washing away cars.

The official death toll from a 7.5 magnitude earthquake and tsunami on Sept. 28 has risen to 2,010, with most of the fatalities in Palu, a small coastal city that bore the brunt of the disaster. More than 10,000 people were injured.

About 70,000 people have been displaced and many are living in crude shelters made out of salvaged wood and plastic in Palu and its surrounding hills.

Health workers in Indonesia are struggling to care for tens of thousands of people displaced by an earthquake and tsunami, with a lack of shelter and clean water among major problems as the focus turns from injury to disease.

"Frankly, we don’t have the capacity to organise and focus our efforts right now," Dr Jumriani, chief of health services at the provincial health department, told Reuters in a tent set up outside her quake-damaged office. 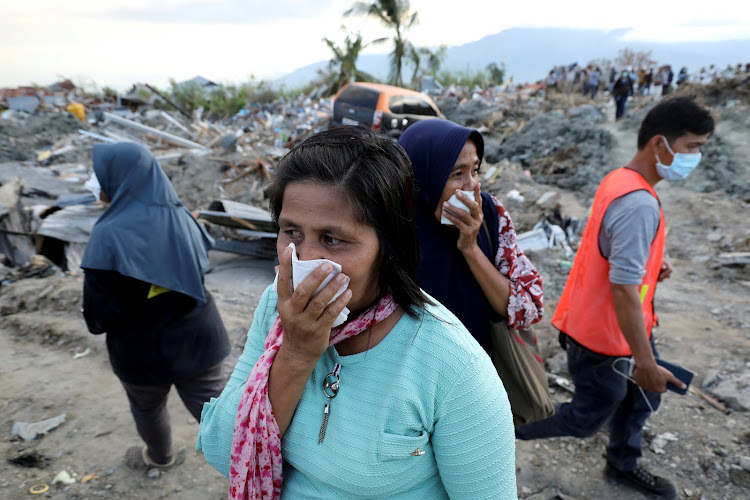 Women react while visiting Petobo neighbourhood which was hit by an earthquake and liquefaction in Palu, Central Sulawesi, Indonesia, October 8, 2018.
Image: REUTERS/Jorge Silva

"The evacuation camps are scattered everywhere and so are our volunteers,” she said.

White boards set up in her tent were crammed with figures on various medical cases in different areas.

“Initially, we were dealing mainly with injuries. Now our main concerns are diarrhoea, flu, skin disease, mostly because of a lack of clean water and exposure,” she said.

A plan to relocate the displaced into more organised communities is being drawn up and the national disaster mitigation agency is seeking 10,000 tents.

For now, the displaced huddle in tarpaulin camps along roads, most with no proper latrines, amid piles of flyblown garbage. Where a temporary toilet is available, scores of people depend on it.

"We're getting enough supplies now, there's food and water, but many kids have started to get sick with diarrhoea and flu,” said Megawati, 31, as she rocked her baby in a sarong hanging from wooden beams holding up a plastic sheet.

With the rainy season due next month, it was essential to improve conditions as fast as possible, said Samuel Carpenter, humanitarian adviser at the British government’s Department for International Development.

"The immediate concern is over shelter and water-borne and vector-borne diseases," Carpenter told Reuters in Palu.

"We need to be prepared for outbreaks."

Indonesia has traditionally been reluctant to accept international aid but has approved overseas help with this disaster, including water purification systems. But it has declined foreign medical aid, saying it is capable of handling that itself.

The earthquake destroyed much of Palu's water system, which will take many months to repair, said city official TM Nazar.

Much of the city is relying on trucks to deliver water.

A volunteer doctor, one of many who have come from across Indonesia to help, estimated that up to 40% of displaced people were suffering from diarrhoea, most of them children under the age of six.

A week after a major earthquake brought devastation to Indonesia's Sulawesi island, Ichsan Hidayat told how the bodies of his sister and her ...
News
3 years ago

Medicines and equipment was being brought in from provincial offices and medical posts were being set but services were haphazard, said the doctor, Fauzan Abdul Hadi.

"At the moment, we're handling things on a case by case basis. I haven’t heard anything from the government yet about systematic medical relief,” he said.

A navy hospital ship with more than 30 doctors and five operating theatres has docked in Palu and has provided life-saving services, especially for injured people pulled from the ruins of collapsed buildings.

Many have been brought in with infected wounds, said Heru Setianto, an anaesthesiologist on board the KRI Dr. Soeharso.

"Many patients were not found quickly so their infections had become so bad so they needed to be operated on immediately," he said.

One woman trapped under the mud for more than a day next to her dead grandmother spoke from her bed on the hospital ship.

"It would be difficult without this because the health clinics are full," said Nur Amalia, 23, who suffered injuries and infections to her legs and an eye.

'God does not strike twice': Indonesians rebuild in disaster zone

About 100m from the beach north of the earthquake-shattered Indonesian city of Palu, a wooden A-frame home is rising in the midst of a wasteland of ...
News
3 years ago

A video showing a giant wave crashing into shore, before moving quickly into the streets when a major earthquake and tsunami hit the Indonesian ...
News
3 years ago