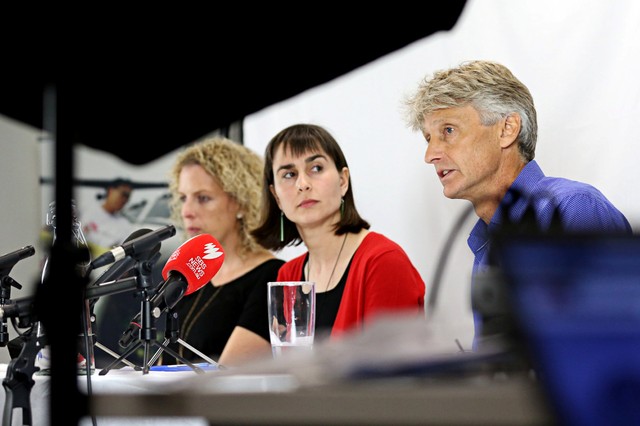 The mental health of refugees detained by Australia on the Pacific island of Nauru has deteriorated so badly that some children are in a "semi-comatose state", unable to eat, drink or talk, Médecins Sans Frontières (MSF) said on Thursday.

Nauru is one of two Pacific nations where Australia detains hundreds of asylum seekers intercepted while trying to reach the country by boat, a policy widely criticised by the United Nations and rights groups.

MSF, one of the few groups to independently assess refugees at the restricted facilities, provided mental health care to asylum seekers and Nauru residents until the Pacific nation cancelled its contract on October 5.

"During our time on the island, we witnessed a significant deterioration of mental health among our asylum seeker and refugee patients," Paul McPhun, executive director of the medical aid group, told reporters in Sydney.

Children are among those affected by mental heath issues, he said, although he did not give a specific number.

"Many children exist in a semi-comatose state, unable to eat, drink and talk," said McPhun, adding that some children required intravenous fluid drips.

Representatives for the government of Nauru and Australia's Minister for Home Affairs, Peter Dutton, who oversees the policy, did not immediately respond to requests for comment.

Dutton told reporters on Wednesday he would like to resettle the Nauru refugees in Australia, but that would encourage other asylum seekers to attempt the dangerous journey by boat.

Conditions in the Nauru camp, and another facility on Papua New Guinea's Manus Island, have been criticised by the United Nations and human rights groups.

McPhun said the decline in mental health among refugees on Nauru was "clearly attributable" to their indefinite detention.

"Shockingly, of the refugees we have treated, at least 78 have attempted suicide, had suicidal thoughts and attempted self-harm," he said.

Australia's centre-right government, which faces an election in 2019, has largely won favour with voters for a policy it says prevents drownings at sea and maintains the integrity of the country's borders. Critics are trying to sway public opinion.

A social media campaign started this week by Simon Holmes à Court aimed to raise A$50,000 ($35,385) to project faces of refugee children onto the Sydney Opera House.

The campaign raised nearly the entire amount in less than a day, organizers said.

Australia has stopped publishing data on the number of refugees held in both centres. Refugee advocates estimate 600 people are detained on Manus Island, and a further 500 on Nauru.

MSF said it expected the humanitarian crisis to get worse as a refugee swap deal with the United States drags on. The U.S. government said in 2016 it would accept up to 1,250 refugees but fewer than 500 have been resettled.

Australian authorities are searching for 50 athletes and officials missing a month after the Commonwealth Games ended in the host city of the Gold ...
News
3 years ago