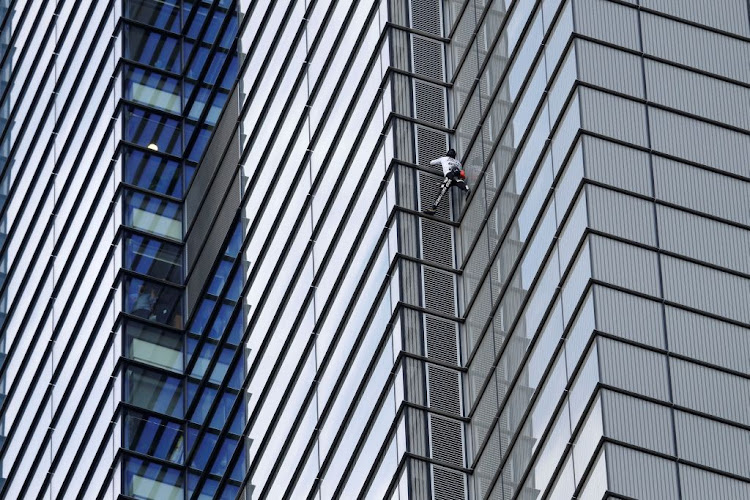 French free-climber Alain Robert, known as "Spiderman", attempts to climb up the outside of the Heron Tower in the financial district of London, Britain, on October 25 2018.
Image: REUTERS/Peter Nicholls

The 56-year-old took an hour to clamber up the 230m Heron Tower in the city's financial district.

Police kept crowds back as he worked his way up, using only chalk and muscle to get to the top.

"I'm not crazy," he told Sky News before the climb. "What I'm doing may seem crazy but I'm not that crazy."

A hobby that started when he was 11 has taken Robert to more than 150 skyscrapers around the world, including Dubai’s Burj Khalifa, the world’s tallest building, the Eiffel Tower, and the Sydney Opera House.

He often climbs without permission and has been arrested several times, sometimes for trespassing.

Police were waiting for Robert when he reached the top of Heron Tower. A spokesperson for City of London police declined to comment on whether he had been charged with any offence.

More than 15‚000 South Africans are competing to row across the Atlantic in a seven-metre boat with explorer Riaan Manser.
Lifestyle
3 years ago

WATCH | Ryan Sandes has an ultra good time in the Alps

The Alps have always defeated top SA trail runner Ryan Sandes - but with the help of “the okes” he says he’s ready to get his own back.
Sport
3 years ago