US Pacific islands brace for long recovery after 'catastrophic' typhoon 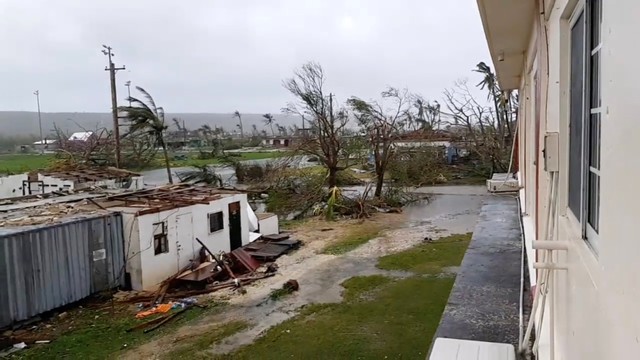 A view shows damages caused by Super Typhoon Yutu in Tinian, Northern Mariana Islands, US, October 25, 2018, in this still image taken from a video obtained from social media.
Image: Office of The Mayor of Tinian and Aguiguan/via REUTERS

Authorities in the Northern Mariana Islands called for urgent supplies and equipment on Friday and were preparing for weeks without power after being hit by their most powerful typhoon in half a century, killing one woman and causing widespread destruction.

Super Typhoon Yutu, a category five storm, struck the US Western Pacific territory overnight on Wednesday, pulling down hundreds of electricity poles, damaging homes and commercial properties and the international airport on Saipan, located about 6,000 km (3,700 miles) west of Hawaii.

On the island of Tinian, which took a direct hit from Yutu, the mayor asked for tools, machetes and chainsaws to help clear debris and urged residents to be patient and conserve fuel, food and water as emergency supplies had yet to arrive.

"Please be calm, help is on its way," mayor Joey Patrick San Nicolas said in a Facebook Live video.

"Our stores are not opening, restaurants have been destroyed and we are left with what we have in our refrigerators in our homes. We are anxiously awaiting the arrival of emergency of military aircraft."

With winds of about 270 kph (168 mph), Yutu was the strongest typhoon seen in the archipelago of 52,000 people since 1968, according to governor Ralph Torres.

He said a long recovery period was ahead and he was pressing the central government for a major disaster to be declared and approved by U.S. President Donald Trump, so the Marianas could receive federal disaster assistance.

Torres said a 44-year-old woman in Saipan had been killed while sheltering in an abandoned building that collapsed.

"This is an unfortunate incident," he said, adding that authorities were focusing on saving and preserving lives.

"Our first responders remain vigilant and (are) working around the clock."

#TyphoonYutu is ravaging through my home. Prayers for my family and friends, as well as those still on the islands. The winds are breaking door open as well as windows that have barricaded from outside. pic.twitter.com/q6EXW8dYo9

U.S. health secretary, Alex Azar, declared a public health emergency for the islands on Thursday to boost access to medical care after what he described as a "catastrophic" storm.

Water pipes were damaged and all flights to Saipan's airport halted. Images on social media showed some buildings near the airport levelled by the storm, beneath them crushed vehicles and debris scattered over large areas.

Some 200-300 power poles had been toppled, and 400-500 were leaning. Authorities requested at least 700 replacements and transformers, and said restoring power to pump water was top priority.

Yutu was travelling at 20 kph on Friday, with winds of 180 kph and gusts 220 kph and headed towards the northern Philippines, where the state weather agency said it could make landfall early on Wednesday.