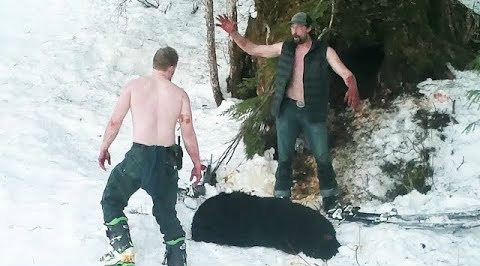 The video shows a father and son illegally killing a black bear and her two newborn cubs while they were hibernating.
Image: YouTube

The US Humane Society released surveillance video this week, showing a father and son illegally killing a black bear and her two newborn cubs while they were hibernating.

"They’ll never be able to link it to us," the son, Owen Renner, can be heard saying on video after taking out the mama bear and her offspring.

German news agency Deutsche Welle reports that the video was captured by surveillance cameras set up by wildlife authorities to observe the bears. The poachers were also captured by the camera two days later when they returned to get rid of the cubs' bodies and destroy evidence.

The New York Post reports the footage was filmed in April 2018 and released on Wednesday by the Alaska Department of Public Safety after a public records request was made by the Humane Society.

The Humane Society said, "the haunting video footage shows the men creeping up to the bears’ winter den and shooting the mother as her two babies shriek in fear, until more shots pierce the air".

The Post reported that Andrew and Owen Renner pleaded guilty to illegally killing the bears.

They both received jail time and had their hunting licences suspended after admitting that they had destroyed evidence and presented the adult carcass as a legal kill to the Alaskan wildlife agency.

"This video of a father and son killing a mother bear and her babies in their den and showing complete disregard for the lives they are taking is reprehensible," the Humane Society said.

"Justice was served, but these animals deserve more respect and compassion."

A cheetah that survived being hunted by two men on horseback with dogs is undergoing treatment and rehabilitation by a wildlife veterinarian.
News
3 years ago