By Kanupriya Kapoor and Joe Brock

Image: REUTERS/Dinuka Liyanawatte Relatives of victims react at a police mortuary after bomb blasts ripped through churches and luxury hotels on Easter, in Colombo, Sri Lanka, on April 22 2019.

Coordinated Easter Sunday bombings at churches and hotels in Sri Lanka bore the hallmarks of militant groups Islamic State or al-Qaeda, security experts said on Monday, citing the level of sophistication of the attacks.

No group has claimed responsibility for the explosions, many of them suicide bombings, which killed 290 people and wounded 500 others - the deadliest attack in the island nation since the end of a civil war in 2009.

Experts said the targeting of churches and hotels where foreign tourists stay in Sri Lanka, which endured several suicide bombings targeting government officials and installations during the civil war, was a "new and worrying development" in the predominantly Buddhist country.

"These synchronised attacks are out of the ordinary for Sri Lanka. Compared with similar attacks in the Middle East and Southeast Asia, it has the DNA of attacks carried out by Islamic State and al-Qaeda," said Alto Labetubun, an anti-terrorism expert who has researched the two groups for a decade. 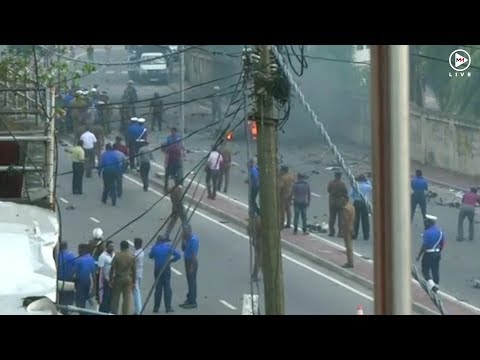 A senior Asian counter-terrorism official who declined to be identified said the attack was likely carried out by a group with "significant operational capability and skilled commanders".

Prime Minister Ranil Wickremesinghe acknowledged on Sunday the government had some prior information about possible attacks on churches involving a little-known Islamist group.

Rohan Gunaratna, a Singapore-based security expert, said the Sri Lankan group was the Islamic State branch in Sri Lanka and perpetrators were known to have links to Sri Lankans who travelled to the Middle East to join the hardline group in Syria and Iraq.

Four of the bombs went off at roughly the same time on Sunday, at 8.45am, with two others coming within 20 minutes.

Two other explosions rocked the city in the afternoon. Authorities later found unexploded devices and a van full of explosives in various locations.

The US State Department issued a travel warning that said there was a threat of more attacks.

Churches have been bombed in various parts of Asia and the Middle East over the years.

Last year, there were suicide attacks on churches in the Indonesian city of Surabaya and in the town of Jolo in the Philippines this year. Islamic State claimed responsibility for both those attacks.

A history of conflict also means it was possible the perpetrators of Sunday's attacks had access to weapons and explosives but it was also likely that foreign actors were involved, they said.

"With this scale of attacks, I don't think this was only carried out by locals. There is most likely involvement of foreign groups or people, including people moving in and out of India or Pakistan," said terrorism expert Labetubun.

"While the scale and sophistication of the attacks suggest an overseas link, there does not appear to be any evidence so far to link it directly to IS," Rao said.

"It is plausible though that the attacks may have been inspired by IS tactics and ideology."