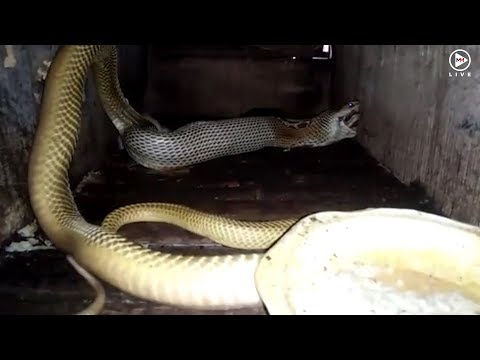 When Laxman Mohapatra went to inspect a strange noise coming from his crate, he wasn't prepared to see his pet mice engaged in a fight to the death with a huge cobra.

The Indian villager, who kept the albino mice in a crate in his home near Puri in eastern India, quickly called Snake Helpline.

When Sushant Behera arrived to help, the cobra had already killed three of the mice and was eyeing the other two. In the video, the snake can be seen hunting its corralled prey, while the mice kept running headlong at the predator, seemingly oblivious to the danger.

As the humans got closer, the stressed snake regurgitated the mice it had eaten before being removed from the crate and released at a natural habitat far away from the village.

Founder of Snake Helpline Subhendu Mallik said: "People keep pet rodents and birds in cages without realising that they may attract snakes. They should ensure the cages are snake proof."

On the strange behaviour of the mice running towards the snake, Subhendu said: ''The albino mice were reared in captivity so they failed to realise the danger they were in. A wild rat would have fled.''