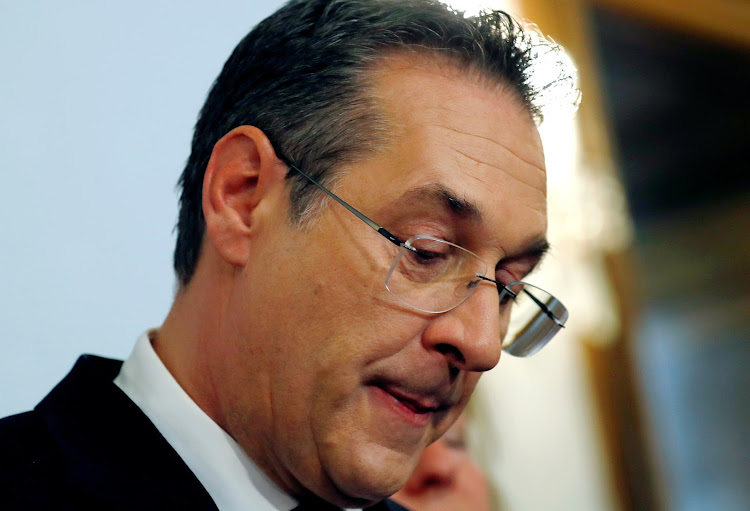 Austrian Vice Chancellor Heinz-Christian Strache reacts as he addresses the media in Vienna, Austria, on May 18 2019.
Image: REUTERS/Leonhard Foeger

Politicians from Europe's mainstream parties called on voters to stand against the far right, after a video sting brought down the leader of Austria's Freedom Party, hurting the momentum of nationalists days before a European parliamentary election.

Austria's president called on Sunday for the country to hold a snap general election in September, seen as the quickest timetable possible, after the resignation of Vice Chancellor Heinz-Christian Strache brought down the ruling coalition.

Strache quit on Saturday after video emerged showing him discussing fixing state contracts in return for financial and political favours with a woman posing as the niece of a Russian oligarch. He accepted that the video was "catastrophic" although he denied breaking the law or following through on discussions.

Strache's far-right Freedom Party, part of Austria's ruling coalition since 2017, has been one of the most successful groups among the anti-immigrant and nationalists that have surged across Europe in recent years.

Mainstream leaders across the continent made clear they hoped his downfall would have an impact far beyond Austria in the May 23-26 vote for the European Parliament. The Freedom Party is part of an alliance of European nationalist parties led by Matteo Salvini of Italy's League, who held a mass meeting in Milan on Saturday with Marine Le Pen of France's National Rally.

Austria's vice chancellor and longtime far-right leader, Heinz-Christian Strache, said on Saturday he was stepping down over video footage that ...
News
2 years ago

"(Strache) has been forced to resign. We find out why: that he was caught trying to sell his services to foreign forces. Behind this nationalist movement is a submission to foreign forces," Le Maire told BFM TV.

German Chancellor Angela Merkel said on Saturday: "We're having to deal with populist movements that in many areas are contemptuous of (European) values, who want to destroy the Europe of our values. We have to stand up to this decisively."

FREE FROM THE WHIRLPOOL

Austria's Chancellor Sebastian Kurz, a conservative who formed a coalition with the Freedom Party in 2017, pulled the plug on his government and called for a snap election on Saturday after Strache's resignation.

He met President Alexander Van der Bellen on Sunday to discuss the timetable for a new vote and the makeup of a caretaker government.

"This new beginning should take place quickly, as quickly as the provisions of the Federal Constitution permit, so I plead for elections... in September, if possible at the beginning of September," the president said. Voting is seen as impossible earlier because voters are away for the summer school holidays.

Europe's far-right parties have surged at the polls since 2015, when more than a million asylum seekers entered the European Union, mainly by foot across the Balkans.

British Prime Minister Theresa May said she will present a "new, bold offer" to lawmakers with "an improved package of measures" in a final attempt ...
News
2 years ago

Since then, far-right parties have become the dominant political movements in much of former Communist eastern Europe and claimed a share of power in coalitions in Austria and Italy. Britain's 2016 vote to leave the EU altogether is seen as part of the same trend.

Neither Salvini nor Le Pen addressed the Austrian scandal directly. Salvini and his allies hope to emerge as the fourth or even third largest bloc in the European parliament after this week's election, moving decisively into the mainstream.

"There are no extremists, racists or fascists in this square," Salvini told Saturday's rally in front of Milan's Gothic cathedral. "Here you won’t find the far right, but the politics of good sense. The extremists are those who have governed Europe for the past 20 years."

German television commentator Christian Nitsche said the Austrian scandal could have a wider impact by showing that the populist tide was not unstoppable.

"Austria can now send a signal that it is able to free itself from this whirlpool. This would probably not yet be a turning point on Europe's wrong path, but a sign of hope that a first country has the strength to turn away from baiting, anti-democratic politicians and parties," he wrote.

Istvan Ujhelyi, a Socialist member of the European parliament from Hungary, a country dominated by nationalist leader Viktor Orban's Fidesz Party, called Strache "the first domino" in a line of likeminded politicians he predicted would soon be brought low.

"Next up are Salvini, Le Pen, Orban and the rest of the far-right puppets on the Moscow leash."

The EU has launched a co-ordinated fight against fake news ahead of this month's European Parliament elections, but officials acknowledge there are ...
News
2 years ago

European elections are going to be "difficult" for the governing Conservative Party, education minister Damian Hinds said on Sunday, when questioned ...
News
2 years ago