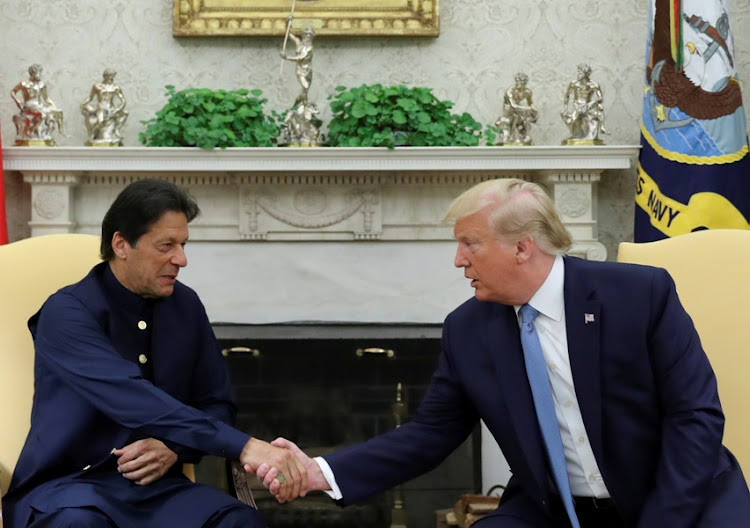 US President Donald Trump greets Pakistan's Prime Minister Imran Khan in the Oval Office at the White House in Washington, US, on July 22 2019.
Image: REUTERS/Jonathan Ernst

Afghanistan called on Tuesday for an explanation of comments by US President Donald Trump in which he said he could win the Afghan war in just 10 days by wiping out Afghanistan but did not want to kill 10 million people.

Trump's remarks followed a meeting with Pakistan Prime Minister Imran Khan at the White House on Monday at which Trump voiced optimism that Pakistan could help broker a political settlement to end the nearly 18-year-old war in Afghanistan.

The remarks drew a stiff response from Afghanistan's presidential palace, which has been excluded from talks between the US and the Taliban and which accuses Pakistan of supporting the insurgency.

"The Afghan nation has not and will never allow any foreign power to determine its fate," the presidential palace said.

"While the Afghan government supports the US efforts for ensuring peace in Afghanistan, the government underscores that foreign heads of state cannot determine Afghanistan's fate in absence of the Afghan leadership," it said in a statement.

It called for clarification of Trump's statement.

In his comments in Washington, Trump said Pakistan was helping the US "extricate" itself from Afghanistan, where the US was acting as a "policeman" rather than fighting a war.

"If we wanted to fight a war in Afghanistan and win it, I could win that war in a week. I just don't want to kill 10 million people," Trump told reporters at the White House where he was hosting Khan.

"I have plans on Afghanistan that, if I wanted to win that war, Afghanistan would be wiped off the face of the Earth. It would be gone," he said.

"Your insulting message to [Afghanistan] is either accept the [Pakistani] proposal for peace or eventually you may have to use nukes," former intelligence chief Rahmatullah Nabil wrote on Twitter.

Trump slammed for tweet about hunting down Mumbai attack mastermind

US President Donald Trump faced criticism for saying Pakistan's arrest of the alleged mastermind of the 2008 attacks on Mumbai had come after a ...
News
1 year ago

"The statement was embarrassing and an insult to all Afghans," said Shakib Noori, an entrepreneur based in Kabul, the capital.

Others said the government had no effective recourse, pointing to its dependence on billions of dollars of aid from the US every year.

"Those who feed you also command you," one commenter, Yazdan Hatami, wrote on Facebook.

Looking to soothe sentiment, US special envoy Zalmay Khalizad, the veteran Afghan-American diplomat who has been leading negotiations with the Taliban, said the comment showed that only a political settlement made sense.

Trump "reiterated to the world that there is no reasonable military solution to the war in Afghanistan, and that peace must be achieved through a political settlement," he wrote on Twitter. "Pakistan committed to do all it can to achieve peace."