WATCH | Texas mass shooting: Everything you need to know 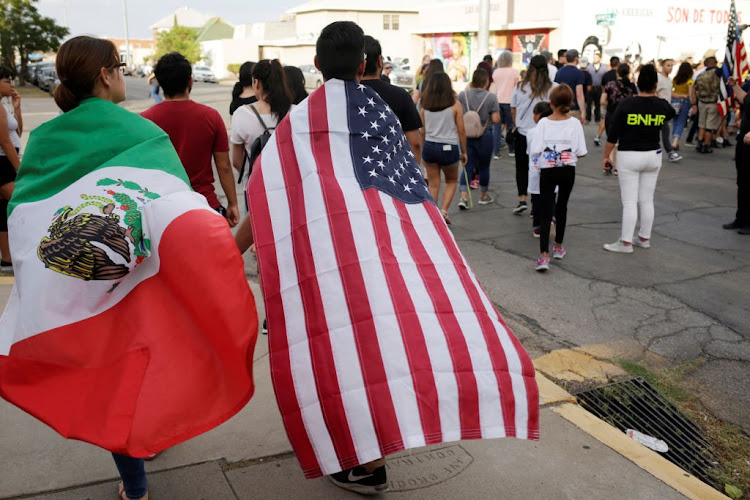 People with the Mexican flag and the US flag take part in a rally against hate a day after a mass shooting at a Walmart store, in El Paso, Texas, US, on August 4 2019.
Image: REUTERS/Jose Luis Gonzalez

The world is reeling after two mass shootings in the US.

In El Paso, Texas, 20 people were killed and more than 26 injured, sparking widespread condemnation and renewed calls for stricter gun control laws in the country.

According to CNN, ABC and Al Jazeera, authorities arrested the suspect at the scene.

Suspect's identity and what happened

Al Jazeera reported that the suspect was identified by authorities as 21-year old Patrick Wood Crusius from Allen, Texas.

He opened fire at a Walmart store, close to  the Cielo Vista Mall and the Mexican border checkpoint.

Erika Contreras told CNN that she, her 70-year-old mother and daughter were at Walmart when the shooting happened. She had gone to buy school supplies for her daughter.

She told the television channel that her daughter was severely traumatised by the incident. "It was chaos. You could see people on the floor who were hit. She couldn't breathe. She was hyperventilating. She was crying."

Motive for the killings

El Paso police's Greg Allen said authorities were investigating if there were any links between the suspect and the "manifesto" found in his possession. In it, Crusius praised those responsible for the mosque attacks in Christchurch, New Zealand, in March, which killed 51 worshippers.

"Right now, we have a manifesto from this individual that indicates, to some degree, it has a nexus to potential hate crime."

The text expresses the author's opposition to the "Hispanic invasion" and states that he expected he would be killed during the shooting.

On Twitter, the US president conveyed his condolences to the victims in Texas and Dayton, Ohio, where nine people were killed and 27 injured, according to CNN.

He also shared updates on progress made by police investigating both incidents.

The FBI, local and state law enforcement are working together in El Paso and in Dayton, Ohio. Information is rapidly being accumulated in Dayton. Much has already be learned in El Paso. Law enforcement was very rapid in both instances. Updates will be given throughout the day!

A man armed with a rifle opened fire at a Walmart store in El Paso, Texas, on Saturday, killing 20 people and wounding 26 others as panicked shoppers ...
News
2 years ago