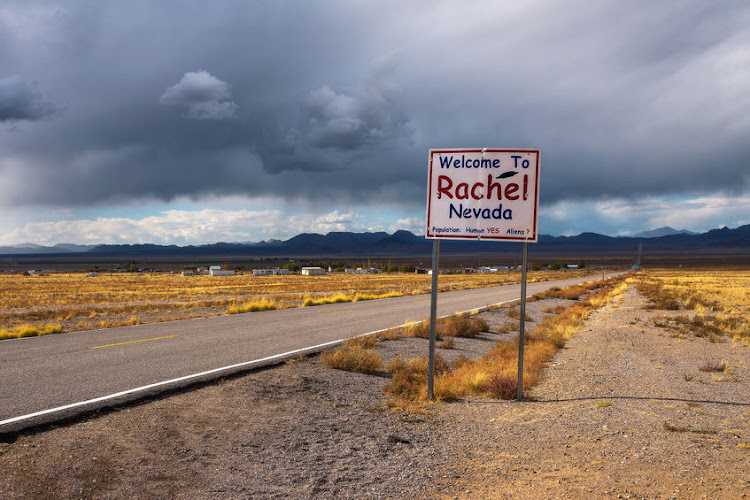 A street sign welcoming visitors to the town of Rachel, with a population of 50, near to Area 51 in the US.
Image: 123RF/mirco1

A call to "storm" the secretive US military base in the Nevada desert known as Area 51 attracted several dozen revellers to a heavily-guarded entrance early on Friday, but most did not attempt to enter the site, long rumoured to house secrets about extraterrestrial life.

A festive scene emerged on Friday, the date a Facebook user had jokingly invited people to run into the base on foot to "see them aliens". Among the UFO enthusiasts and curiosity seekers, one man wore an orange space suit and some sported tin foil hats and alien masks. A sign in the gathering read "Free E.T. from the government".

"A bunch of random people in weird costumes standing outside of a government base, why would you want to miss that?" said a YouTube personality who goes by the name Atozy. "That's a once in a lifetime experience."

One young woman ducked under a protective gate and was briefly detained by authorities and released. Others stayed outside the perimeter, according to law enforcement officials keeping watch over the crowd.

"They're just here to see what's going on," said Sgt Orlando Guerra of the Nevada Department of Public Safety Investigation Division. "They’re here to have fun."

The US Air Force had issued a stern warning to the public not to trespass into Area 51, which it said is used to test aircraft and train personnel.

Jason Strand, 23, said he travelled from Utah to the rural Nevada site as part of a group of nine friends to take in the scene. He said he was not inclined to dart into Area 51.

"We're came out here to see the dumb people make a run for it," he said.

Area 51 had long been shrouded in mystery, stoking conspiracy theories that it housed the remnants of a flying saucer and the bodies of its alien crew from a supposed unidentified flying object crash in Roswell, New Mexico, in 1947.

The US government did not confirm the base existed until 2013, when it released CIA archives saying the site was used to test top-secret spy planes.

The documents, however, did not end suspicion about space aliens there.

Area 51 sits about 19km from Rachel, Nevada, a tiny outpost north of Las Vegas that is hosting a music festival to entertain any UFO hunters or others heading to the region. Some residents had urged the public to stay away because they worried the town of 50 year-round residents would be overwhelmed with unruly tourists.

As of early Friday, a few hundred campsites had been set up by visitors outside the Little A'Le'Inn, an alien-themed motel and restaurant that is Rachel's only business.

"I'm relieved it's here," said Connie West, co-owner of the inn, who had scrambled to set up a campground, bring in portable toilets and otherwise support the influx of visitors. "It's happening. There was no stopping it."