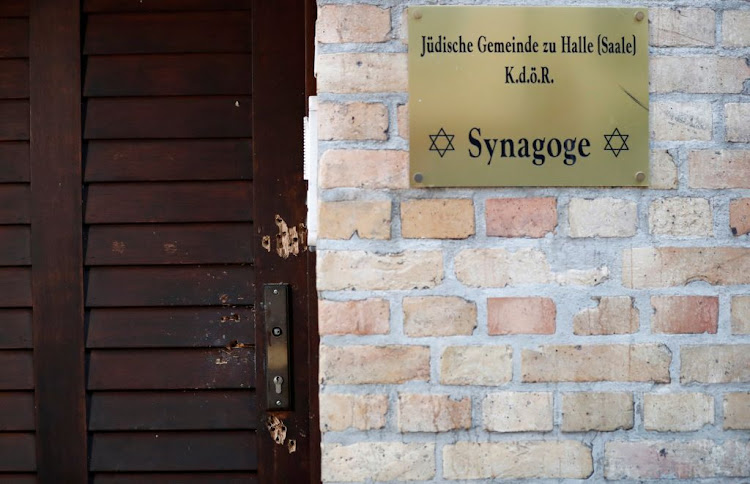 The damaged door of a synagogue is seen in Halle, Germany, on October 10 2019, after two people were killed in a shooting.
Image: REUTERS/Fabrizio Bensch

The alleged perpetrator of Wednesday's gun attack on a German synagogue had few friends, but a clear idea of the internet audience he wanted to impress.

"Want to be friends?" he asked with a smirk at the start of his livestreamed rampage through the city of Halle, later cursing and apologising to his invisible audience for failing to shoot the congregation praying inside.

"Sorry guys," he said, driving away from the synagogue, where he had shot and killed a passer-by on the street. "One time a loser, always a loser," he said, cursing furiously, the cocksure swagger gone.

Stephan B., named by prosecutors on Thursday as their main suspect, was described by his father in an interview with newspaper Bild as a friendless figure who lived his life online, blaming others for his own failings.

"He wasn't at ease with himself or the world, always blaming others," he said.

Bild and other media said the 27-year-old lived with his mother in a suburb of Halle and had dropped out of university after only two terms.

A military source said he had served for a period in the German army, though received no special training.

But the video he streamed on Twitch, an Amazon-owned website targeting the gaming community, and an 11-page manifesto he uploaded to a German message board frequented by the far right give a clear sense of the audience whose adulation he craved.

The bullying, them-against-us tone of messageboards like 4chan, where the video continued to spread after Twitch removed the original livestream, or Kohlchan, a German-language equivalent where the manifesto was first uploaded, can offer a sense of community to the socially isolated.

Packed with gaming-inspired wisecracks and internet forum inside jokes, the manifesto concluded with a list of "achievements" he was aiming for - starting with uploading the manifesto and continuing with killing Jews and Muslims and burning down synagogues and mosques.

"I originally planned to storm a mosque or an antifa 'culture center', which are way less defended, but even killing 100 golems won't make a difference, when on a single day more than that are shipped to Europe," he wrote, using one of the many derogatory terms for Jews with which he peppered the screed.

In the video, he blamed feminism for reducing birthrates in Europe, creating an excuse for inviting in immigrants.

But the manifesto and the video marked him out as a believer in "replacement theory" - a staple of far-right thinking that says "whites" are at risk of being displaced by "non-white" mass immigration into Europe and North America.

Proponents of replacement theory, such as the Identitarians, a more mainstream far-right group who say European "identity" risks being extinguished by mass immigration, were at pains to distance themselves from the perpetrator within hours of the shooting.

"The killer Stephan B. is a classic type of psychopathic right-wing terrorist, whose ideology and acts we utterly reject," the Flamberg, an Identitarian clubhouse in Halle, said in a statement on the Telegram messaging service.