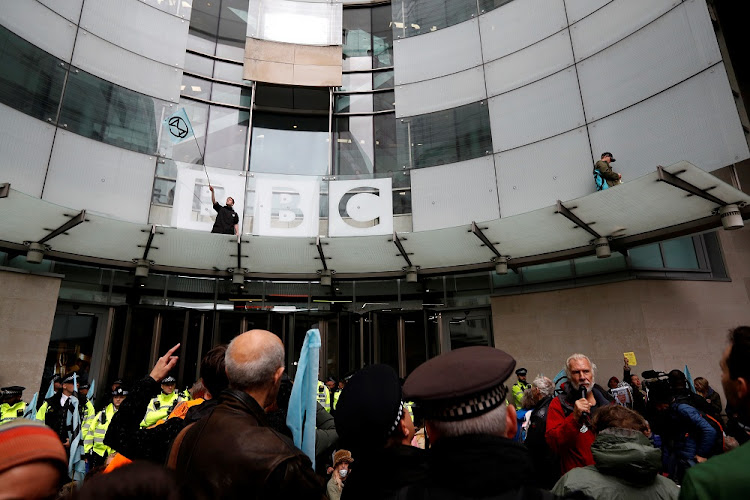 A protester waves a flag next to the BBC logo at the company's headquarters during an Extinction Rebellion demonstration in London, Britain October 11, 2019.
Image: REUTERS/Peter Nicholls

Extinction Rebellion protesters blocked the BBC's headquarters on Friday, calling on Britain's public service broadcaster to treat climate change with the same gravity as World War Two and tell the public the truth.

The group, which promotes a rebellion against the political, economic and social structure of the modern world to avert the worst devastation outlined by scientists studying climate, is engaged in two weeks of civil disobedience in London.

Extinction Rebellion rose to prominence in April when it snarled traffic in central London for 11 days. It wants governments to take much more radical to reduce greenhouse emissions.

Holding banners bearing slogans such as "Planet Before Profit", waving flags, singing and chanting, a few dozen demonstrators gathered outside of the BBC's main building calling for it take global warming more seriously.

"We're here today to demand that the BBC respond to the emergency in the way they responded to World War Two i.e. devoting the entire professional management structure to getting the message out to the British public," spokesman Donnachadh McCarthy told Reuters.

"We're here because the BBC has refused to declare a climate emergency. We're also here today because the BBC continues to normalise high-carbon lifestyles with programmes like Top Gear promoting flying and driving," he said.

A BBC spokeswoman said she could not comment on security matters. She refused to comment on the criticism of BBC coverage.

Some activists sat outside the BBC offices and glued their hands to doors after days of similar such action around the city.

The group has been taking action in several countries including Britain, Germany, Austria, Australia, France and New Zealand since the start of the week.

Police in London have made more than 1,000 arrests.

The group wants Britain to reduce greenhouse gas emissions to net zero by 2025 rather than the government's 2050 target.