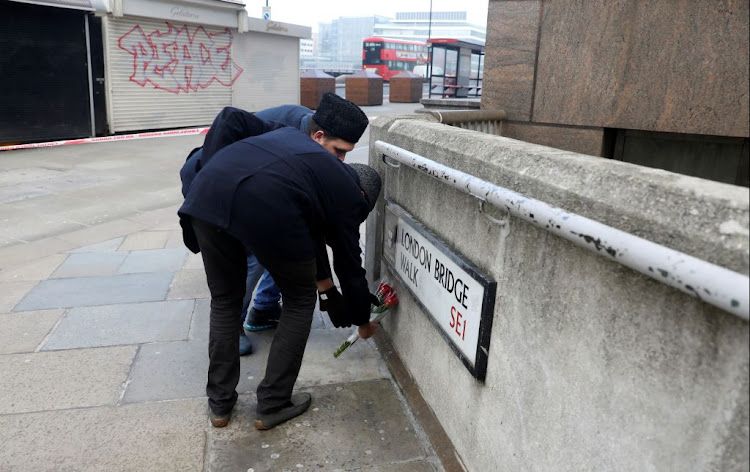 Sabah Ahmedi and Mansoor Clarke, imams of the Ahmadiyya Muslim Community, lay down flowers on November 30 2019 to mourn the victims at the scene of a stabbing on London Bridge, in which two people were killed, in London, Britain.
Image: REUTERS/Simon Dawson

The 28-year-old British man who killed two people in a stabbing spree on London Bridge before police shot him dead had previously been convicted of terrorism offences and was released from prison last year.

Sporting a fake suicide vest and wielding knives, Usman Khan went on the rampage just before 2pm on Friday at a rehabilitation conference beside London Bridge. He was wrestled to the ground by bystanders and then shot dead by police.

Prime Minister Boris Johnson, who has called a snap election for December 12 and is due to host NATO leaders including US President Donald Trump next week, said it was a terrorist attack and said Britain would never be cowed.

Khan, whose family hails from Pakistan-controlled Kashmir, was convicted in 2012 for his part in an al-Qaeda-inspired plot to blow up the London Stock Exchange but was released in December 2018 subject to conditions.

"This individual was known to authorities, having been convicted in 2012 for terrorism offences," Britain's top counter-terrorism police officer, Neil Basu, said in a statement.

"Clearly, a key line of enquiry now is to establish how he came to carry out this attack," Basu said.

Two people - a man and a woman - were killed in the attack. In addition, a man and two women were injured and remain in hospital, Basu said.

British police on Friday shot dead a man who had strapped a fake bomb to his body and stabbed a number of people in what they said was a terrorism ...
News
2 years ago

Britain's security minister Brandon Lewis said police are not looking for any other suspects over the attack.

During the 2017 election campaign, London Bridge was the scene of an attack when three militants drove a van into pedestrians and then attacked people in the surrounding area, killing eight and injuring at least 48.

Islamic State said its fighters were responsible, but the British authorities have cast doubt on those claims. The attack focused attention on cuts to policing since the governing Conservatives took power in 2010.

Friday's attack, just 13 days before an election that could decide the fate of Brexit and the world's fifth largest economy, prompted political leaders to scale back campaigning.

The focus of campaigning is likely to shift from Brexit and the health service to crime.

"This country will never be cowed, or divided, or intimidated by this sort of attack," Johnson told reporters in Downing Street. He also praised the bravery of bystanders who tackled Khan to the ground.

A video posted on Twitter showed police dragging one man off the suspect before an officer took careful aim. Two shots rang out. The man stopped moving.

Opposition leader Jeremy Corbyn said he was horrified by the attack.

"We must and we will stand together to reject hatred and division," said Corbyn, who opinion polls show trails Johnson.

The alleged perpetrator of Wednesday's gun attack on a German synagogue had few friends, but a clear idea of the internet audience he wanted to ...
News
2 years ago