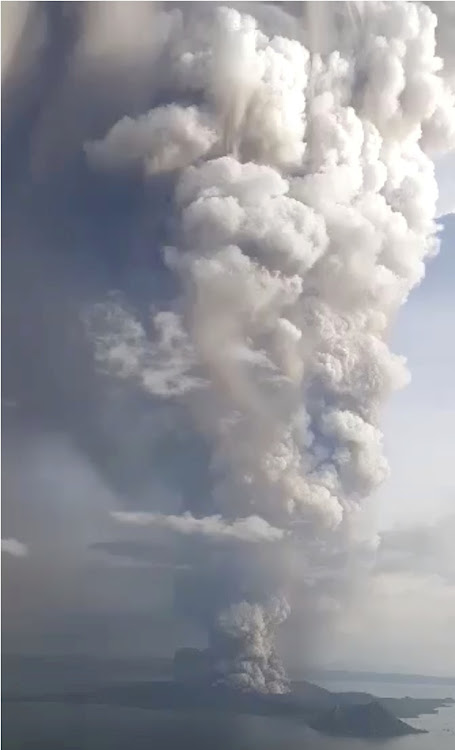 A volcano south of the Philippine capital Manila spewed a giant ash plume accompanied by rumbling sounds and tremors on Sunday, prompting authorities to raise the alert level and order the evacuation of about 8,000 residents.

The Philippine Institute of Volcanology and Seismology raised the alert level at the rumbling Taal volcano to "level 3", indicating "magmatic unrest" that could lead to a "hazardous eruption in weeks". The highest alert is level 5, hoisted when magmatic eruption is underway.

In an advisory, the institute said it was strongly recommending that people evacuate the area around the Taal volcano, which is on an island in the middle of Taal lake, and two nearby "high-risk" municipalities in Batangas province as it warned of "possible hazards of pyroclastic density currents and volcanic tsunami".

The country's National Disaster Risk Reduction and Management Council told reporters that an evacuation of the area has begun, led by local government officials.

The volcano spewed ash that generated a 1km high plume that later triggered ashfall in nearby communities, the Institute said.

About 8,000 residents were at risk and needed to be immediately evacuated, according to the National Disaster Risk Reduction and Management Council, citing the Institute's data and recommendations.

The head of the Institute, Renato Solidum, advised communities around Taal lake to also take precautionary measures and be vigilant of possible lake water disturbances related to the volcanic activity.

Solidum said the entire island should be strictly off-limits to all residents.

The heavy ash fall also reached the province of Cavite, prompting the provincial government to suspend classes on Monday and urge residents to stay indoors.

The phreatic explosion and ash plume were visible from the nearby city of Tagaytay, a popular spot for viewing the volcano and where tourists flock during weekends.

"We were having lunch when we heard rumbling. We saw the volcano erupting. It rained and some small pebbles fell to the ground," Jon Patrick Yen, a restaurant customer in Tagaytay, told Reuters.

"I did not expect to see such spectacle. We just went by to eat."