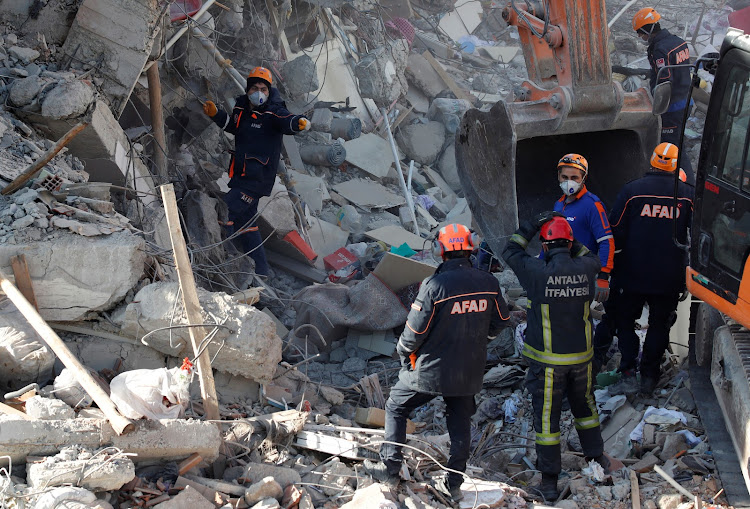 Eight people died and others were stuck under collapsed buildings in southeastern Turkey on Sunday after a magnitude-5.7 earthquake struck near the border with Iran, the Turkish government said as teams dug through rubble in nearby villages.

Three of those killed were children and 21 people were injured, including eight critically, Turkey's health ministry said. Interior Minister Suleyman Soylu said some 1,066 buildings collapsed in the shallow tremor whose epicentre was in a rural area of northwest Iran.

Turkish TV footage showed people digging with shovels and their hands in collapsed buildings, as well as furniture and belongings strewn on cracked roads. Some residents were wrapped in blankets in the snow outside homes with crumbled exterior walls, fallen metal roofs, wide cracks and twisted wiring.

"The damage caused loss of life," the governor of Van, Mehmet Bilmez, told reporters standing in front of a pile of cinder blocks and sheet metal. "There is destruction in all four villages" he visited on Sunday, he added.

The European Mediterranean Seismological Centre (EMSC) said the quake, which hit at 8:53 a.m. local time (05:53 GMT), had a depth of 5 km (3.1 miles). Iranian officials said it had been felt in Iran but that there were no immediate reports of deaths.

Turkish broadcasters and government officials said the quake affected dozens of villages in Turkey, which like Iran has a history of powerful earthquakes. The education ministry reported minor damage to several schools in the rural districts of Baskale, Saray and Gurpinar.

Soylu said Turkey's Disaster and Emergency Management Authority (AFAD) had begun rescue work in villages including in Ozpinar, about 25 km south of the epicentre. AFAD measured the tremor at 5.9 magnitude.

The U.S. Geological Survey put the epicentre 47 km west of the Iranian city of Khoy and 90 km east of the Turkish city of Van, where there were reports of collapsed buildings.

Crisscrossed by major fault lines, Iran and Turkey are among the most earthquake-prone countries in the world.

An earthquake last month in eastern Turkey killed more than 40 people while another in Iran did structural damage to homes without causing any fatalities.

An Iranian official told state TV that rescue teams had been dispatched to the area. "So far, we've had no reports of damage or fatalities in the area, which is not a populated area in Iran's West Azarbaijan province," the official said.

But another local official said "it is very likely that there will be casualties and damage", Iran's state TV reported. The official said the earthquake was felt in several towns including Khoy, Urmiah and Salmas and many villages, including some that suffered "100% damage".

An undersea earthquake with a magnitude of 6.1 struck south of Indonesia's Bali on Tuesday, the European earthquake monitoring agency EMSC said, ...
News
1 year ago
Next Article