US President Donald Trump on Friday capped a tumultuous week as Americans faced sweeping life changes and massive Wall Street losses amid the fast-spreading coronavirus outbreak by turning to a familiar playbook: attacking the media.

In a contentious press briefing, the Republican president lashed out at an NBC reporter who noted Trump's tendency to put an optimistic spin on the situation and asked what his message was to the American people who may be scared.

"I say that you're a terrible reporter. I think that is a nasty question," Trump said.

Two of the nation's most populous states - California and New York - have enacted their toughest restrictions yet affecting some 60-million people, while federal authorities this week moved to close the borders with Canada and Mexico. More than 200 people have died in the United States and over 14,000 cases of the highly contagious respiratory illness had been confirmed by Friday.

Trump and top administration officials for weeks downplayed the outbreak, which began in China in December, before shifting their tone about the severity of the health crisis more recently. 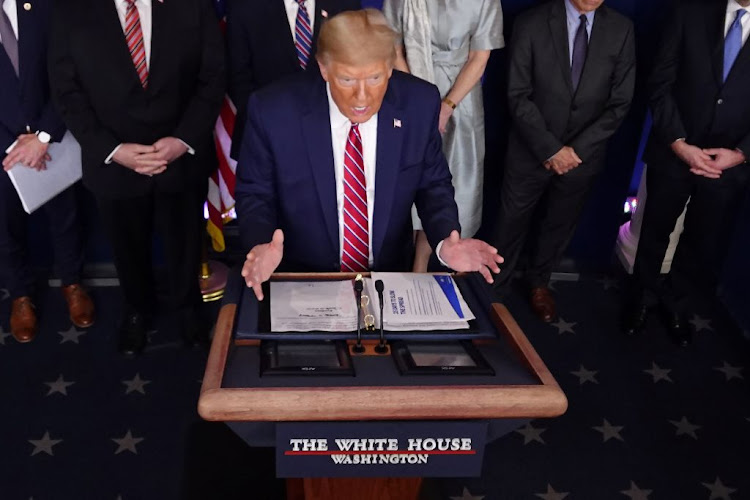 US President Donald Trump addresses the coronavirus response daily briefing with members of the administration's coronavirus task force at the White House in Washington, US, on March 20 2020.
Image: REUTERS/Jonathan Ernst

The president, who is running for re-election on Novemebr 3, has long sparred with the media, blasting coverage of him as "fake news" and "hoaxes," and slamming news outlets and journalists on his Twitter feed. His re-election campaign also recently filed lawsuits against several outlets, including the New York Times and the Washington Post.

Yet the crises has propelled Trump recently to give briefings with news outlets nearly every day in the White House briefing room, a place he eschewed during his first three years in office.

On Friday, in a particularly unusual twist, Trump's first White House press secretary, Sean Spicer, attended the briefing and asked a question in his role working for Newsmax. Spicer repeatedly sparred with reporters during his time as a spokesman early in Trump's term.

During his recent engagements with the press, Trump has sought to display unabashed optimism despite more sober comments from public health officials, medical experts, state governors and others who have sounded the coronavirus alarm.

One reporter on Thursday asked about the impact on the economy as many businesses have had to dramatically shift operations or shut down entirely during drastic measures to slow the spread of the virus.

"Thanks for telling us. We appreciate it," Trump said. "What’s the rest of your question? We know that. Everybody in the room knows that."

Asked last week about his role regarding the disbanding of a National Security Council pandemic preparedness team on his watch, Trump told a PBS reporter: "That's a nasty question ... When you say me, I didn't do it."

US president Donald Trump continues to backtrack on his stance on the coronavirus, now saying, 'I felt it was a pandemic long before it was called a ...
News
1 year ago