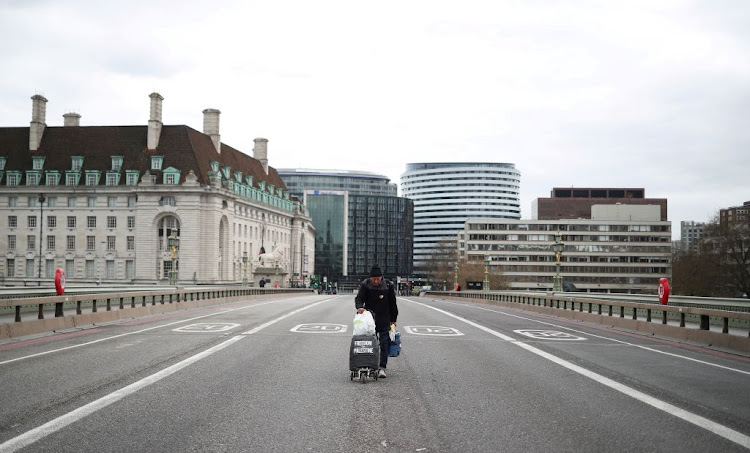 A man walks in the middle of Westminster Bridge, as the spread of Covid-19 continues, in London, Britain, on April 3 2020.
Image: REUTERS/Hannah McKay

Britain will not be able to relax its stringent lockdown rules until the end of May, a leading government adviser said on Saturday, warning that first the spread of coronavirus must slow and intense testing must be introduced.

Neil Ferguson, a leading professor of mathematical biology at Imperial College London, said work was under way to establish how more relaxed rules could be introduced in time.

“We want to move to a situation where at least by the end of May that we're able to substitute some less intensive measures, more based on technology and testing, for the complete lockdown we have now,” he told BBC Radio.

“There is a great deal of work under way to look at how we can substitute some of the very intense social distancing now in place with a regime more based on intensive testing, very rapid access to testing, contact tracing of contracts.

“But to substitute that regime for what we're doing now, we need to get case numbers down.”

The government has put Britain into a widespread lockdown, closing pubs, restaurants and nearly all shops, while banning social gatherings and ordering people to stay at home unless it is absolutely essential to venture out.

By Friday, Britain's death toll from the global pandemic had risen to 3,605, among 38,168 people who have tested positive for the highly infectious respiratory illness known as Covid-19.

A second senior government adviser, the chief pandemic modeller Graham Medley, told The Times newspaper on Saturday he feared Britain had painted itself in a corner with no clear exit from a strategy that will damage the economic and mental wellbeing of much of the population.

Two of the principal US coronavirus hot spots - New York and Louisiana - reported their biggest jumps in Covid-19 deaths yet on Friday, as the White ...
News
2 years ago

Police found the young doctor's lifeless body in the couple's flat after Antonio De Pace allegedly called them and confessed to what he had done. He ...
News
2 years ago

Peter Kerpen tested positive for the virus but was discharged from Montefiore Hospital after making a full recovery on Tuesday.
News
2 years ago