Residents around the world take coronavirus surveillance into their own hands 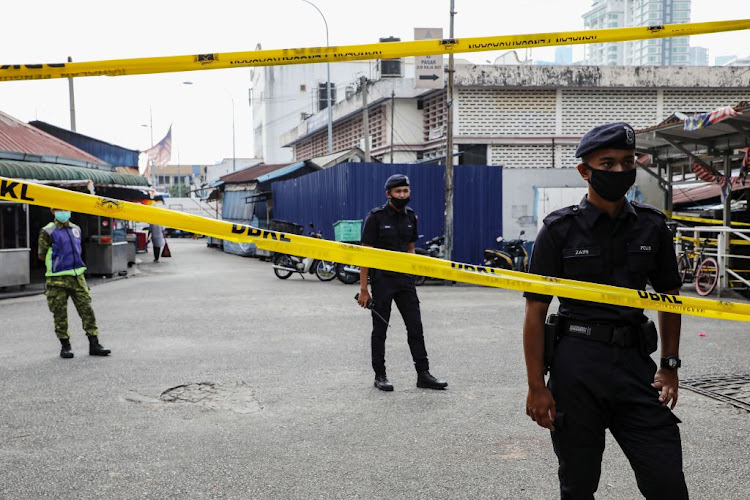 Police officers stand guard at an entrance of a market, during the movement control order due to the outbreak of Covid-19, in Kuala Lumpur, Malaysia, on March 27 2020.
Image: REUTERS/Lim Huey Teng

A week after Malaysia ordered a partial lockdown to slow the spread of the coronavirus, construction supervisor Hafi Nazhan saw residents in his affluent Kuala Lumpur neighbourhood jogging outside.

He took photos of people flouting the stay-at-home order and published them on Twitter, receiving hundreds of shares. Hafi's followers informed the police, who subsequently arrested 11 joggers in his neighbourhood.

They were charged with violating the movement restriction order and each fined 1,000 ringgit ($230) in court.

“I was upset some people did not take this stay-at-home order seriously. These are well-educated people,” Hafi, 26, told the Thomson Reuters Foundation, adding that police were spurred into taking action after his tweets went viral.

As governments around the world urge citizens to stay indoors to contain the deadly virus, concerned communities are taking surveillance matters into their own hands, reporting alleged breaches of quarantine and questioning anyone they deem suspicious.

The respiratory disease — which emerged in China late last year — has infected roughly 1.2-million people and killed about 65,000, according to a global tally by Johns Hopkins University.

In Singapore, a Facebook post by a man sharing a photo of himself enjoying a bowl of bak kut teh — pork rib soup — in a restaurant when he should be self-quarantining at home was so widely circulated that officials stepped in.

Singapore's law minister ordered an investigation and the immigration authorities told local media the man was likely to be charged, though they did not respond to requests seeking comment.

Lockdown lawbreakers are being reported by 'rational, good people'

Big Brother may be watching over the coronavirus, but so are the neighbours - and the rest of the street.
News
2 years ago

In New Zealand, which is under a one-month shutdown, a police website set up to allow residents to report their neighbours who break isolation rules crashed hours after going live.

The website has received about 14,000 reports in less than a week since its March 29 launch, New Zealand police said in an e-mail. They reportedly include people playing frisbee and holding parties.

In Italy, which has been under lockdown for weeks, fraying tempers have led to people being insulted from balconies or photographed and put on social media.

In Spain, locals have also begun posting videos of people going for a run, walking in the park, riding a bike — all prohibited activities — on social media.

Such tip-offs and videos have sparked a debate over digital ethics with some arguing that normal privacy rules do not apply in a health emergency because the information is in the public interest.

“When we are all threatened with the risk of catching a lethal, incurable disease I see no reason why individuals should not report their legitimate concerns to the authorities,” said David Watts, former privacy commissioner for Australia's Victoria state.

“There is not much point having privacy rights when you are dead,” added Watts, who now teaches information law and policy at Melbourne-based La Trobe University.

For David Lindsay, law professor at the University of Technology Sydney, privacy is “not an absolute right and must always be balanced against other rights and interests”.

“The balance struck obviously depends upon circumstances, and a global pandemic is an extreme event,” he said.

Still, both Watts and Lindsay said the balance between privacy and surveillance should be reset when the pandemic is over.

Others, like Joseph Cannataci, the UN special rapporteur on the right to privacy, fear surveillance measures ranging from facial recognition to phone tracking could outlast the current crisis.

“Dictatorships and authoritarian societies often start in the face of a threat,” he told the Thomson Reuters Foundation this week.

“Often the people who might be reported on will be the least privileged, or might be belong to, in the case of India, lower caste communities or people who have to work outside,” he said.

Human rights experts worry that the tens of thousands of migrant workers who returned to Myanmar after a shutdown in neighbouring Thailand's left them jobless will come under intense scrutiny.

In a village in central Myanmar, locals would not allow a young man who returned from Thailand to stay in his home, said Khin Zaw Win, a Yangon-based political analyst.

Foreigners have also been targeted on social media, with a Facebook video showing agitated residents in a neighbourhood in Mandalay, Myanmar's second largest city, who described barging into a building after seeing Chinese visitors coughing.

Filmed on Tuesday night, it has received more than 1-million views and 10,000 shares.

“The public is being very sensitive at the moment ... when the key in this kind of situation is that you should help each other,” said Khin Zaw Win.

“Some of it has to do with the narrative that (coronavirus) was brought here from abroad. I think the panic is even scarier than the virus,” he added.

Myanmar so far has about 20 confirmed cases of the virus, with the health ministry warning of a “major outbreak” after the return of migrant workers from Thailand.

Officials have also reminded the public that failure to report people suspected of being infected could lead to jail sentences of up to a month.

“From the point of view of public health, surveillance and tracking is essential. The faster and the more effectively you can enforce it, the better,” said Sid Naing, Myanmar country director for health charity Marie Stopes International.

“But it should not be done in a way that breeds hatred and fear. It should be done based on understanding and support,” he said.

“At the moment, the state cannot provide full surveillance so people started doing it themselves because they are terrified ... but there are stigma and discrimination behind the fear and those are the problems.”

Snitching on your neighbours during lockdown? You're not alone!

If you were thinking of breaking the lockdown rules, just don't!
News
2 years ago

The "semi bald" man jogging along Blackburn Road in Durban North, the woman jogging on Lindsay Drive and the dog walker on Umhlanga beach, Twitter ...
News
2 years ago