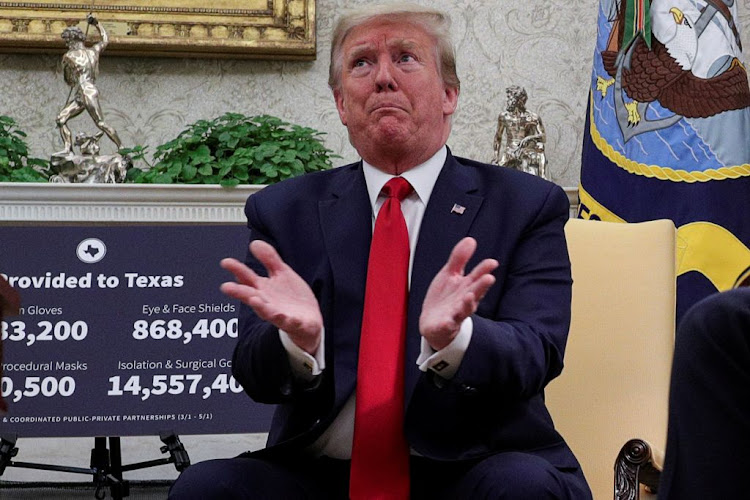 US President Donald Trump during a meeting about the response to the the coronavirus with Texas Governor Greg Abbott in the Oval Office at the White House in Washington, US, on May 7 2020.
Image: REUTERS/Tom Brenner

Trump, asked whether those who serve him food would now cover their faces, told Fox News in an interview that such White House staff had made that change.

“They've already started,” he said on the network's “Fox and Friends” morning programme.

The White House on Thursday said Trump and vice-president Mike Pence tested negative for the virus and were feeling well after the staffer - a US military service member who works at the White House as a valet - came down with the virus. It also said the two leaders would now be tested daily, vs weekly.

Trump has said he would not wear a mask and has not publicly worn a mask to any of his events so far amid the Covid-19 pandemic, but told reporters this week that he tried some on behind the scenes during his visit to a Honeywell face mask factory in Arizona.

“As I greet presidents, prime ministers, dictators, kings, queens ... I don’t see it for myself, I just don’t,” Trump said in early April when the Centers for Disease Control and Prevention began recommending mask use to slow the spread of the coronavirus.

The virus, which first surfaced in Wuhan, China late last year, has killed more than 75,000 Americans and driven millions into unemployment as a result of lockdown measures to curb a rise in infections. Lockdown measures are being eased in some states, but many are still requiring mask use.

Both Trump and vice-president Mike Pence have drawn fire for not donning face masks, with critics arguing they are setting a bad example for Americans.

Pence did not wear a mask while visiting coronavirus patients during a recent visit to Minnesota's famed Mayo Clinic, noting that he was tested frequently for the disease. But he later said he should have worn one, saying it carries a symbolic weight as well.

The vice-president, who has led the White House coronavirus task force that Trump this week said he was going to wind down before reversing course to keep it, is scheduled to travel to Iowa to meet faith leaders about holding “responsible” gatherings and to discuss the food supply at the headquarters for Midwestern grocery chain Hy-Vee Inc.

Trump is scheduled to attend a public event at the World War 2 memorial later on Friday before meeting with Republican members of Congress at the White House, according to the White House.

The Republican president also told Fox News that he has not yet been tested for antibodies to the novel coronavirus but probably would be soon. Such a test could confirm previous exposure to the virus.

US President Donald Trump says he 'can't imagine' why calls have spiked at poison control centres.
News
1 year ago