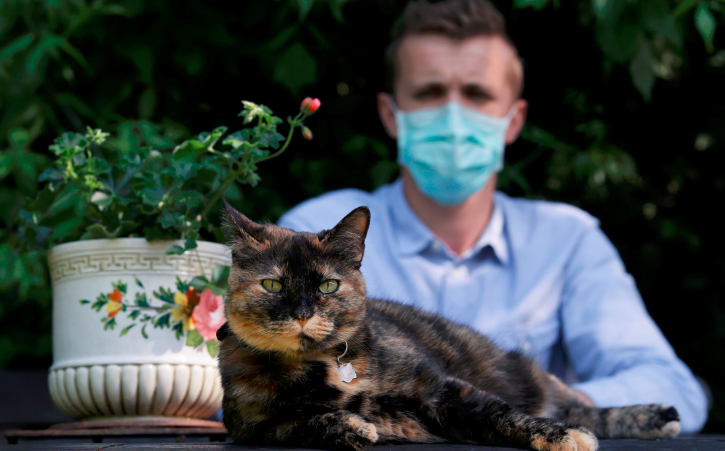 Brian, 24 year-old, suspected to have been infected by the SARS-CoV-2 poses in his garden with Papille, his 9 year-old cat who recovered after being tested positive for the virus amid the coronavirus disease (COVID-19) outbreak, in Athis-Mons, near Paris, France, May 27 2020.
Image: REUTERS/Christian Hartmann

Papille purrs contentedly as her owner rubs the back of her head, her coat glossy and her eyes a piercing green - back to her old affection-seeking self after recovering from Covid-19.

The nine-year-old cat is the first known case of a pet being infected by the coronavirus in France. There have only been a handful of other known cases globally. The likely source of infection: her owners, themselves Covid-19 sufferers.

"We didn't know what was wrong with her," said Papille's owner Brian.

He asked Reuters not reveal his surname after the family received hate messages on social media following the cat's illness.

"Mum found it strange the she was showing the same symptoms as a human: fatigue, a cough and bouts of lethargy. We said to ourselves, 'perhaps it's Covid-19. Unlikely, but perhaps'."

Their intuition turned out to be correct.

Brian, 24, first showed Covid-19 symptoms in late March. The petrochemical plant employee was signed off work and self-isolated at home where he lives with his parents. Several days later his mother Florence had a high fever and felt drained.

Her test returned positive. As Florence recovered in bed, Papille would snuggle up to her, Brian said. Then Papille too fell ill.

"She couldn't stand, she wouldn't react when we called her. She'd barely lift her head," said Brian. "It was us who transmitted the virus."

Papille was tested at a leading national vet school on the southeastern edge of Paris.

"Human to animal transmission is not something that is impossible, but it is very rare, said Renaud Tissier, science director at the Alfort National Vet School. We have no cases of humans being infected by pets."

Spar apologises for misinformation that pets can carry coronavirus, pledges R400,000 to SPCA

SPAR apologised for posters claiming pets can carry Covid-19 by pledging R400,000 for animal welfare organisations in the country.
News
1 year ago

Pets in the clear for Covid-19

You don’t have to worry about catching Covid-19 from one of your pets – this particular strain of the coronavirus has infected hundreds of thousands ...
News
1 year ago