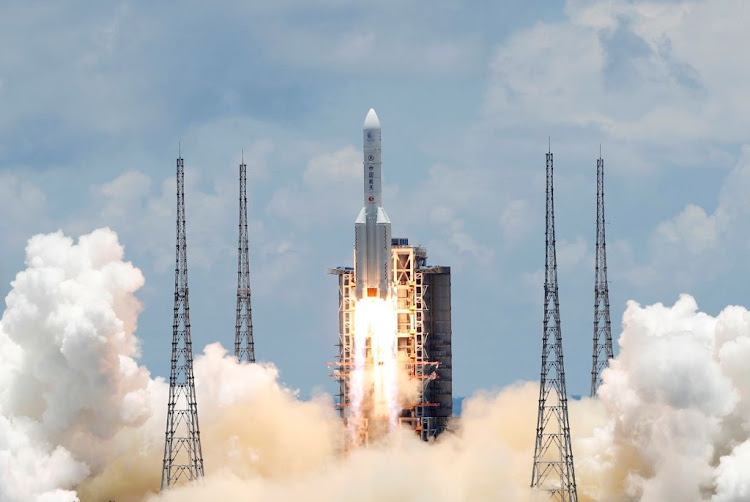 China successfully launched an unmanned probe to Mars on Thursday in its first independent mission to another planet, in a display of its technological prowess and ambition to join an elite club of space-faring nations.

China's largest carrier rocket, the Long March 5 Y-4, blasted off with the probe at 12:41pm (0441 GMT) from Wenchang Space Launch Centre on the southern island of Hainan.

In 2020, Mars is at its closest to Earth, at a distance of about 55 million kilometres , in a window of about a month that opens once every 26 months.

The probe is expected to reach Mars in February where it will try to land in Utopia Planitia, a plain in the northern hemisphere, and deploy a rover to explore for 90 days.

If successful, the Tianwen-1, or "Questions to Heaven", the name of a poem written two millennia ago, will make China the first country to orbit, land and deploy a rover in its inaugural mission.

Since 1960, half of all the 50-plus missions to Mars including flybys had failed, due to technical problems. Only a handful attempted to land on the planet.

Challenges multiply for those attempting a landing - from ensuring a precise deceleration of the spacecraft to navigating the planet's sometimes violent atmosphere.

"The mission must necessarily be challenging, and not be following in the footsteps of others completely," Liu Tongjie, mission spokesman, told Reuters after the launch in an interview.

"This is an exploration project, so there will be no 100% assurance of success. If the mission is unsuccessful, or if there are problems, we will continue to push ahead, re-establish the project, and re-commit."

China previously made a Mars bid in 2011 with Russia, but the Russian spacecraft carrying the probe failed to exit the Earth's orbit and disintegrated over the Pacific Ocean.

Eight spacecraft - American, European and Indian - are currently either orbiting Mars or on its surface, with other missions underway or planned.

The United Arab Emirates launched a $200m mission to Mars on Monday, an orbiter that will study the planet's atmosphere.

Liu declined to give a cost estimate for China's mission, but said expenses have been "very economical" when spread out over the six years since research and development began in 2014.

The next US mission may be launched as soon as end-July. The probe will deploy a rover called Perseverance, the biggest, heaviest, most advanced vehicle sent to the Red Planet by the National Aeronautics and Space Administration (NASA).

NASA's InSight is currently probing the interior of Mars on a plain called Elysium Planitia. Curiosity, a car-sized rover deployed by NASA, is studying soil and rocks in Gale Crater, searching for the building blocks of life.

Asked if Tianwen-1 would present new frictions with the United States, Liu told Reuters the Chinese mission is a scientific exploration project not to compete with anyone but co-operate with each other.

"From our point of view, Mars is large enough for multiple countries to explore and carry out missions," Liu said in an interview, when asked if there was a chance the Chinese rover would meet with Curiosity and InSight.

China's probe will carry 13 scientific instruments to observe the planet's atmosphere and surface, searching for signs of water and ice.