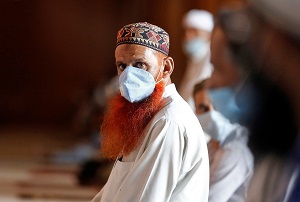 India reported a record daily jump of coronavirus infections on Saturday, bringing the total near 3 million and piling pressure on authorities to curb huge gatherings as a major religious festival began.

For most of western India, especially the financial capital Mumbai, the 11-day festival of Hindu elephant-headed god Ganesh is usually celebrated with big public gatherings.

Cases have plateaued in Mumbai, which now averages just above 1,000 a day and has recorded more than 134,000 in total. But strict pandemic regulations have meant the festival season, which begins this month, has been lacklustre.