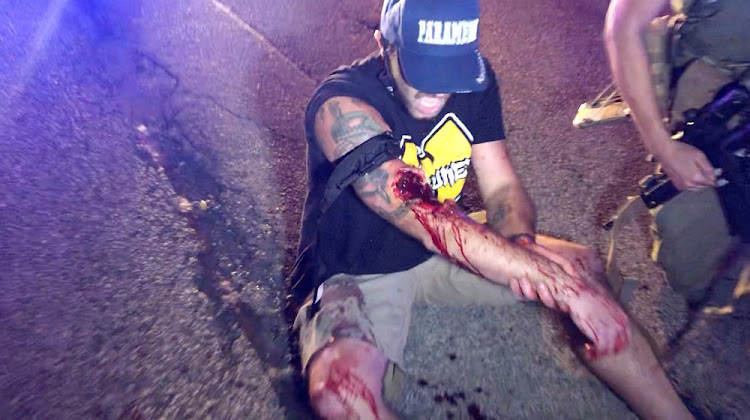 A man wounded during a protest following the police shooting of Jacob Blake, a Black man, sits on a street in Kenosha, Wisconsin, US, August 25.
Image: Still image obtained from a social media video. INSTAGRAM / @LOURIEALEX/via REUTERS

Three people were shot, one of them fatally, as gunfire broke out on the streets of Kenosha, Wisconsin, on the third straight night of unrest sparked by the police shooting of a Black man, the New York Times reported, citing law enforcement.

Social media videos posted early Wednesday showed a gun battle involving civilians, with several people rushing a man with a long gun who apparently had been knocked to the ground. The video shows him firing at the people rushing towards him, one of whom falls to the ground. Other shots are heard in the background.

"Stay down, stay down!" someone yells.

"Keep going this way," a person says, apparently trying to guide others to safety as shots are fired.

The father of #JacobBlake: “They shot my son seven times, seven times. Like he didn’t matter. But my son matters. He’s a human being and he matters.” pic.twitter.com/miKnkOUwMq

Another social media video shows a man lying between parked cars with an apparent gunshot wound to the head, and several people rush to his aid.

A third video shows a man with a severe arm wound sitting on the ground who is tended to by a man with a long gun as police approach.

Kenosha has been rocked by protests since Sunday, when police shot Jacob Blake in the back as he walked away from two officers and opened his car door, according to a bystander video that went viral. Three of his young sons were in the car, witnesses said.

Blake, 29, was left paralyzed and "fighting for his life," his family and lawyers said on Tuesday, hours before the latest round of civil unrest in the lakefront town between Milwaukee and Chicago.

Sunday's shooting occurred three months after the May 25 death of a Black man in Minneapolis, George Floyd, who was pinned to the street under the knee of a white police officer, sparking nationwide protests against police brutality and racism within the U.S. criminal justice system.

Police arrested more than 60 people on Tuesday in a protest march in Louisville, Kentucky, organized for Breonna Taylor, a Black woman killed in March by police officers who burst into her apartment.

Police in Portland, Oregon, declared a gathering of hundreds of anti-racism protesters outside City Hall as a riot, ordering the crowd to disperse or face arrest.

In an almost snakelike fashion, law enforcement push forward on their line and move people out of the park in front of the Kenosha County Courthouse. They’ve declared it an unlawful assembly. #Kenosha pic.twitter.com/IHPC8gIjEf

Police and protesters skirmished in Kenosha on Tuesday night and early on Wednesday. Officers in riot gear fired rubber bullets, tear gas and flash-bang rounds to push back demonstrators who defied a dawn-to-dusk curfew and gathered outside a courthouse and adjacent park.

There were no apparent fires as there had been the previous two nights, destroying several businesses.

The night appeared to have turned calm, but then the gunfire erupted around midnight.

Three people were shot and one died, the Times reported, citing an interview with Sheriff David Beth.

In the video of the man with a head wound, one bystander takes off his shirt to stop the bleeding, but has trouble finding the wound, until other people comes to their aid.

"You shot him?" someone asks.

"I didn't," comes the response.

Others implore the wounded man to keep his eyes open and tell him he will be OK.

"You've got to keep him alive," someone says.

Throughout the protests, several people have been carrying rifles, whether slung over their shoulder or at the ready while standing guard outside business to protect them from looters or arsonists.