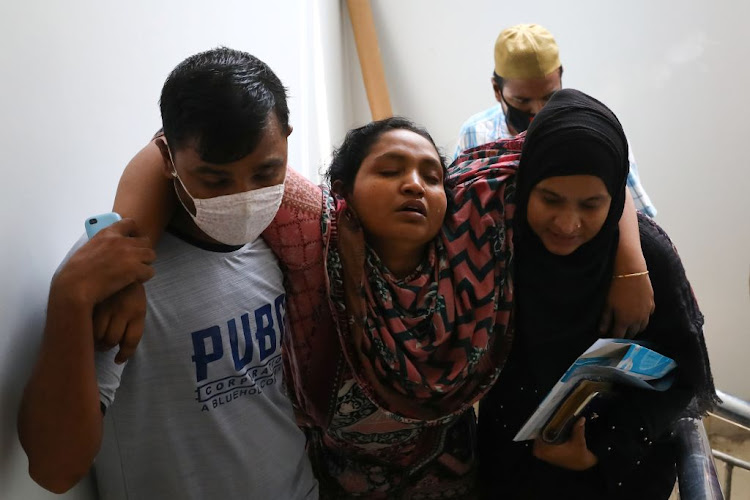 Relatives of victims mourn at a hospital, after a gas pipeline blast at a mosque in Narayanganj, near Dhaka, Bangladesh, on September 5 2020.
Image: REUTERS/Mohammad Ponir Hossain

A gas pipeline explosion near a mosque in Bangladesh killed 13 people and injured 30 as worshippers were about to end their prayers, officials said on Saturday.

The explosion, which fire service officials suspect was caused by leakage from the pipeline, occurred on Friday night at a mosque in Narayanganj district, just outside the capital Dhaka.

Dozens were rushed to Dhaka's state-run specialised burn and plastic-surgery hospital, most of them with severe burns.

Thirteen people, including a child, died after they sustained burn injuries, said Samanta Lal Sen, coordinator of the burn unit. The death toll could rise further as many of them were in critical conditions, he said.

Fire officials said gas that accumulated in the mosque after pipeline leaks likely triggered the blasts.

"We primarily suspect that gas leaked from the pipeline and accumulated inside the mosque since the windows were shut. When the air conditioners was turned on, due to sparks the gas could have exploded," said Abdullah Al Arefin, a senior fire service official.

All six air conditioners in the mosque exploded during the incident, he said.

Authorities have launched an investigation into the incident.

Several people were injured on Monday in an explosion that was likely caused by gas lines in a restaurant in the United Arab Emirates' capital Abu ...
News
1 year ago

US calls for credible probe into Beirut blast

A senior US official called on Saturday for a "thorough, transparent and credible" investigation into this month's Beirut port blast that killed 172 ...
News
1 year ago