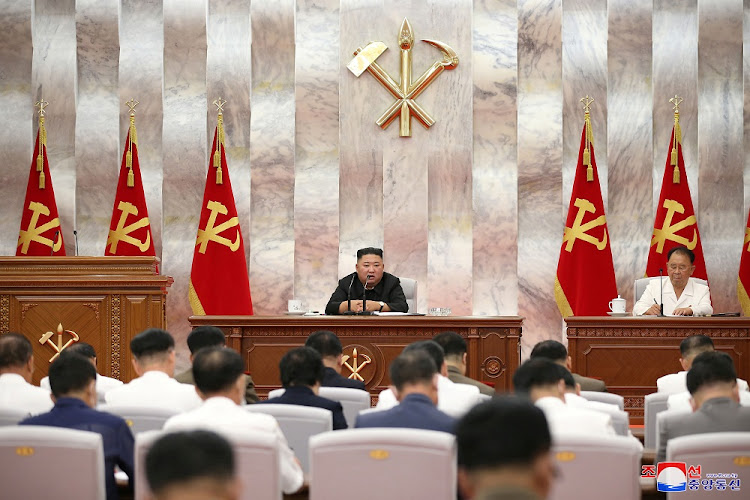 After surveying the typhoon damage suffered by his impoverished country, North Korean leader Kim Jong Un told party loyalists they would have to rethink plans for an economy already hobbled by sanctions and more recently coronavirus restrictions.

Typhoon Maysak, the ninth typhoon of the season, led to a state of emergency, destroyed more than 2,000 houses, inundated public buildings and roads, and caused the collapse of 59 bridges, state media said.

North Korea was left with no choice except to "change the direction of our struggle", Kim said in comments carried by state-run KCNA on Wednesday.

Addressing a meeting of the ruling Workers' Party (WPK) on Tuesday, Kim said he will reconsider how to followthrough on year-end projects as the country recovers from torrential rains and floods caused by one of the wettest rainy seasons on record. .

Run by the Kim dynasty, since the country's founding in 1948, North Korea has struggled with mismanagement and increasing political and economic isolation after it pursued nuclear weapons in defiance of United Nations resolutions.

Even longtime partners like China and Russia backed the stricter sanctions, though both countries now call for the measures to be eased, and the UN has warned that wide swaths of the population face chronic food insecurity.

South Korea hunkered down as Typhoon Haishen travelled northwards along the country's east coast on Monday, a day after the powerful storm battered ...
News
9 months ago

Last year, Kim vowed to make a breakthrough in the country’s campaign to build a self reliant economy in the face of tightening sanctions aimed at curbing its nuclear and missile programmes.

But denuclearisation talks with the United States have been stalled, leaving Pyongyang to contend with sanctions that include heavy restrictions on exports and imports, and bar joint business ventures.

Meanwhile, North Korea's efforts to prevent a coronavirus outbreak delivered another blow to the economy.

The country has not reported any cases of the coronavirus, but imposed lockdowns and quarantines, ended international flights and heavily restricted cross-border trade.

While the problems are unlikely to pose a threat to Kim's rule, North Korea will need to make significant domestic and foreign policy changes to head off steadily worsening living conditions, growing economic problems and a declining humanitarian situation in the next year or two, according to Chad O'Carroll, CEO of the Korea Risk Group, which monitors North Korea.

"2020 has arguably produced the most challenging set of circumstances for the (North Korea) leadership since Kim Jong Un took power in Dec. 2011," he wrote in a report last week.

On Wednesday state TV showed North Korean officials, party members, and workers holding a mass rally and marching in the streets on their way to help in typhoon-struck regions.

One of the hardest-hit areas was Komdok in South Hamgyong Province, where the transport systems for several large zinc and magnesite mines suffered "total paralysis" due to storm damage, KCNA reported.

Output from the mines is believed to be sold through China, providing North Korea with much-needed foreign exchange. Consequently, Kim is expected to prioritise repairing facilities at the mines, while putting other tasks on the back-burner, said Martin Weiser, a South Korea-based researcher.

"The Komdok area is a central pillar of North Korea's mining industry and not rebuilding it as quickly as possible likely would lead to a larger loss than if they continued with their original plan," he said.

North Korea announced last month that the WPK will hold a congress next year to decide a new five-year plan.

At the time the party admitted that "the people's living standard not been improved remarkably."

Japan's coastguard on Saturday suspended its search for crew missing from a cattle ship in the East China Sea due to bad weather from a typhoon, a ...
News
9 months ago

North Korea's ruling party is calling for the punishment of officials whose failure to follow orders resulted in "dozens of casualties" during ...
News
9 months ago

At least one person was reported killed and thousands were temporarily without power as Typhoon Maysak smashed into the Korean peninsula on Thursday, ...
News
9 months ago