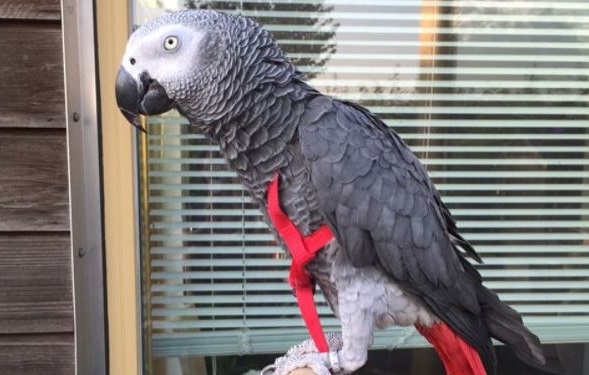 African grey parrots are known to learn and repeat words out loud.
Image: ultimatecakeart via Instagram

Imagine you are spending a pleasant day at a wildlife park and you are looking at the parrots on display when the birds start swearing at you.

That was the experience of several visitors to the Lincolnshire Wildlife Park in England, who were told where to get off while admiring the new African Greys on show.

The park is described as a “zoo with more than 100 parrot species” and attracts visitors to its quirky rainforest-like displays.

The National Parrot Sanctuary at the park is the largest of its kind in the country and recently welcomed five African greys. They were kept in a room together before being added to a display, but seemed to have learnt cuss words while boarding together.

At first it was funny but the mood changed when they started swearing at visitors.

The park's CEO Steve Nichols told CNN he had been called “a fat t**t” every time he walked past their display.

"They literally, within a very short period of time, starting swearing at each other. 'F**k off is the most common one. It's a very easy one for them to learn".

He said a decision was made to move several parrots back to isolation.

Nichols told the BBC the swearing triggered a reaction that encouraged the parrots to  swear more.

“With the five, one would swear and another would laugh and that would carry it on. Some visitors found it funny, but with children visiting on weekends, we decided to move them.

“I'm hoping they learn different words within colonies. If they teach the others bad language and I end up with 250 swearing birds, I don't know what we'll do,” he said.

The Guardian UK reported that the parrots have since been sent to different areas of the sanctuary so they do not “set each other off”.

The Johannesburg lawyer who was caught on video insulting a judge has “unreservedly” apologised for his conduct.
News
7 months ago

A 23-year old man from Lyttelton, Centurion, has been arrested for allegedly contravening the 21-day Covid-19 lockdown regulations.
News
1 year ago
Next Article