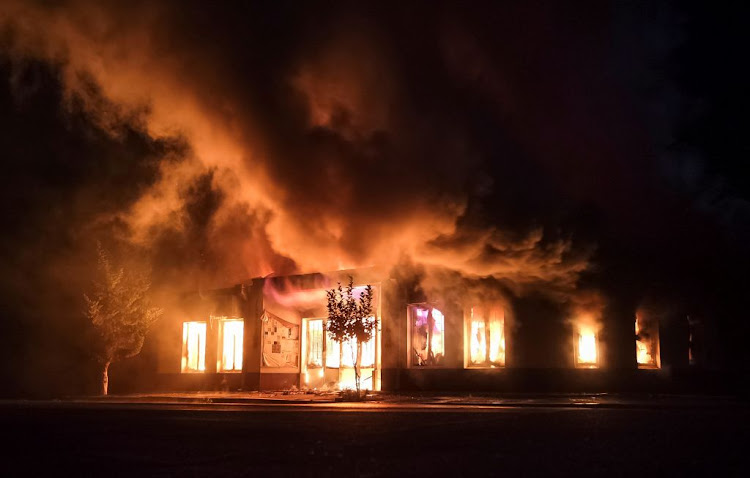 A shop is seen on fire following recent shelling during a military conflict over the breakaway region of Nagorno-Karabakh in Stepanakert on October 3 2020.
Image: Gor Kroyan/REUTERS

Azerbaijan's President Ilham Aliyev demanded on Sunday that Armenia set a timetable for withdrawing from the enclave of Nagorno-Karabakh and surrounding Azeri territories, and said Azerbaijan would not cease military action until that happened.

In a televised address to the nation, Aliyev said Azeri forces were advancing in a weeklong offensive to retake lands that they lost to ethnic Armenians in the 1990s.

“Azerbaijan has one condition, and that is the liberation of its territories,” he said. “Nagorno-Karabakh is the territory of Azerbaijan. We must return and we shall return.”

“My condition is the following: let them withdraw their troops, and the confrontation will be stopped, but this should not be in words, but in deeds,” he added.

He said the international community had failed for three decades to enforce UN resolutions or put pressure on Armenia to return Azeri territories.

The content and tone of Aliyev's message made clear that Azerbaijan would not entertain calls for an immediate ceasefire, as Russia, the US and European Union have urged.

Speaking immediately after Aliyev’s speech, Armenian defence ministry official Artsrun Hovhannisyan said: “I don't think that there is any risk for Yerevan (the Armenian capital), but anyway we are in war.”

The clashes are the worst since the 1990s, when about 30,000 people were killed and are spreading beyond the Nagorno-Karabakh enclave. They have raised international concern about stability in the South Caucasus, where pipelines carry Azeri oil and gas to world markets.

The conflict threatens to drag in other regional powers as Azerbaijan is supported by Turkey, while Armenia has a defence pact with Russia.

Hundreds of people have been killed in the past week of fighting between Azerbaijan and ethnic Armenian forces, including more than 40 civilians.

Earlier on Sunday, Azerbaijan said Armenian forces had fired rockets at its second city of Ganja, killing one civilian and wounding 32, and also launched a missile attack on the Azeri industrial city of Mingachevir. Azerbaijan threatened to retaliate by destroying military targets inside Armenia.

Armenia's foreign ministry said on Friday it was ready to engage with the Organization for Security and Cooperation in Europe (OSCE) to re-establish ...
News
1 year ago

Both Armenia's and the breakaway region's defence ministries said they denied the Azeri claim of the Armenian attack on Mingachevir in Azerbaijan.

Turkey's foreign ministry said: “The attacks of Armenia targeting the civilians in Ganja ... are a new manifestation of Armenia's unlawful attitude. We condemn these attacks.”

Armenia denied it had directed fire “of any kind” towards Azerbaijan. The leader of Nagorno-Karabakh said his forces had targeted a military airbase in Ganja but later stopped firing in order to avoid civilian casualties.

Until now, the main fighting has been between Azerbaijan and Nagorno-Karabakh, an ethnic Armenian enclave inside Azerbaijan, but it now threatens to spill over into a direct war with Armenia itself.

Russian Foreign Minister Sergei Lavrov called for an immediate ceasefire in a conversation with Armenia's foreign minister and said Moscow was ready to help seek a solution to the conflict via the Organization for Security and Co-operation in Europe (OSCE).

Azerbaijan, however, says it has lost patience with the OSCE's failure to resolve the conflict.

Nagorno-Karabakh once again came under Azeri bombardment on Sunday and an official there said the civilian death toll over the past week had risen to 18, including casualties in the enclave's capital of Stepanakert and nearby Shushi.

Azerbaijan says it has lost 24 civilians, and Armenia two.

Aliyev said on Twitter his forces had captured the town of Jabrail and several villages in what, if confirmed, would be a significant advance on the southern edge of Nagorno-Karabakh.

Armenian defence ministry spokesperson Shushan Stepanyan dismissed the claim as “yet another fabrication”. Independent verification was not possible.

The United Nations Special Envoy for Yemen, Martin Griffiths, said he was working to build on the prisoner exchange agreement announced on Sunday to ...
News
1 year ago