'I can't get it and I can't give it': Donald Trump claims he is now immune from Covid-19 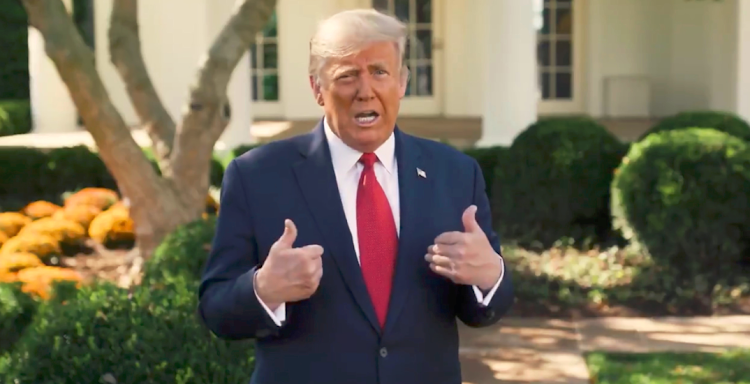 US President Donald Trump makes an announcement about his treatment for coronavirus disease, in Washington, US, in this still image taken from video on October 7 2020.
Image: The White House/Handout via REUTERS THIS IMAGE HAS BEEN SUPPLIED BY A THIRD PARTY.

President Donald Trump will try to put his bout with Covid-19 behind him when he returns to the campaign trail on Monday, beginning a three-week sprint to the November 3 election with a rally in the vital battleground state of Florida.

The event at an airport in Sanford, Florida, will be Trump's first campaign rally since he disclosed on October 2 that he had tested positive for Covid-19. Trump, who spent three days in the hospital for treatment, said on Sunday he was fully recovered and no longer infectious, but did not say directly whether he had tested negative for the virus.

A total and complete sign off from White House Doctors yesterday. That means I can’t get it (immune), and can’t give it. Very nice to know!!!

The Republican president is seeking to change the dynamics of a race that opinion polls show he is losing to Democratic rival Joe Biden just 21 days before election day.

For months, Trump had worked furiously to shift public attention away from the virus and his handling of the pandemic, which has infected nearly 7.7 million people in the US , killed more than 214,000 and put millions out of work.

But his own illness has put the spotlight squarely on his coronavirus response during the closing stretch of the race.

Biden, in a sign of fresh optimism as he leads Trump in national and many key state polls, heads on Monday to Ohio, a state Trump won by 8 percentage points in 2016. It is Biden's second campaign trip in as many weeks to Ohio, which was once thought out of reach but where polls now show a tight race.

Trump's rally in Florida, and planned rallies in Pennsylvania on Tuesday, Iowa on Wednesday and North Carolina on Thursday, will be watched closely to see whether the president has changed his approach to campaigning since contracting the virus.

He has been criticised for failing to encourage supporters at campaign events, and even White House staff, to wear protective masks and abide by social-distancing guidelines. At least 11 close Trump aides have tested positive for the coronavirus.

Trump, speaking from a White House balcony on Saturday, urged hundreds of largely Black and Latino supporters to help get out the vote. Standing alone, Trump was not wearing a mask as he spoke. Most in the crowd were wearing masks but not following social-distancing guidelines.

Asked on Saturday if Trump should be resuming rallies, Biden said it was important that he makes it clear to all those in attendance the importance of staying socially distanced and wearing masks.

“That's the only responsible thing to do,” Biden told reporters.

FLORIDA UP FOR GRABS

Trump told Fox News in an interview on Sunday that he felt good and pointed to his physician's memo from Saturday saying he had taken a test showing he was no longer infectious.

Trump also said, without producing evidence, that he was now immune, an assertion that drew a flag from Twitter for violating the social media platform's rules about misleading information related to Covid-19.

The scientific research has been inconclusive on how long people who have recovered from Covid-19 have antibodies and are protected from a second infection.

Most recent polls in Florida, where a Trump loss would dramatically narrow his path to re-election, show Biden with a small lead. Trump won Florida over Democratic presidential nominee Hillary Clinton in 2016 by just 1.2 percentage points, which helped propel him to the White House.

On his visit to Ohio, Biden will deliver a speech in Toledo meant to undermine what polls show is Trump's last greatest strength, the view among some voters that the former real estate entrepreneur is better on handling the economy.

Biden also will attend a get-out-the-vote event in Cincinnati, his campaign said.

Trump has pulled back his advertising in Ohio in recent days, while Biden has increased his, another sign of the opportunity the former vice president and his fellow Democrats see to make more states competitive than they initially imagined.

President Donald Trump, still confined to the White House where he is being treated for Covid-19, planned more steps on Thursday to try to ...
News
11 months ago

'Don't be afraid' of Covid, Trump says as he returns to the White House

US president Donald Trump told Americans "to get out there" and not fear Covid-19 as he returned to the White House on Monday after a three-night ...
News
11 months ago

US President Donald Trump and his wife Melania announced that they had tested positive for Covid-19 on Friday.
News
11 months ago