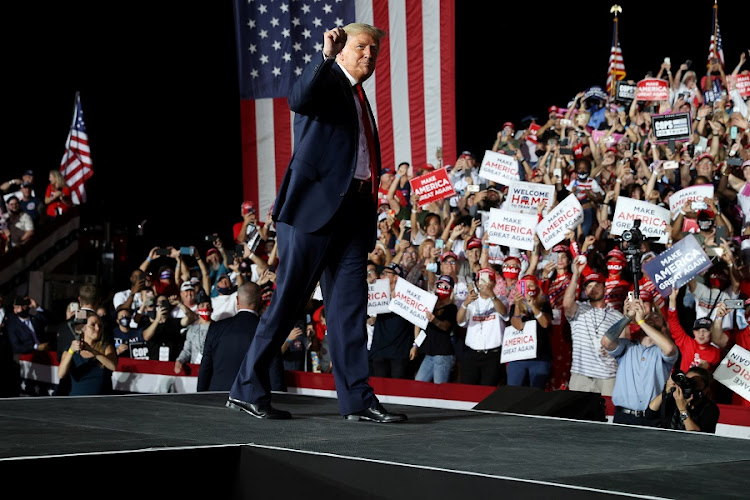 US President Donald Trump departs at the end of a campaign rally, his first since being treated for the coronavirus disease (Covid-19), at Orlando Sanford International Airport in Sanford, Florida, US. File photo
Image: REUTERS/Jonathan Ernst/File Photo

President Donald Trump and Democratic rival Joe Biden will rally supporters on Thursday in the battleground of Florida, visiting the same city hours apart and putting on full display their contrasting approaches to the resurgent coronavirus pandemic.

Opinion polls show Biden with a significant edge nationally, but his lead is tighter in battleground states. A Reuters/Ipsos poll released on Wednesday showed Trump had essentially moved into a tie with Biden in Florida, with 49% saying they would vote for Biden and 47% for the president.

With its 29 electoral votes, the state is a major prize in next Tuesday's election.

Trump will stage an outdoor rally in Tampa. Thousands of people have crowded together at recent Trump rallies, many eschewing masks despite public health recommendations.

Biden, in contrast, will hold a drive-in rally later in Tampa where attendees will remain in their cars. He will host a similar event earlier in the day in Broward County in South Florida.

You can’t win ’em all, unless, of course, you’re Donald Trump

In the days leading up to the election, the pandemic that has upended life across the United States this year, killing more than 227,000 people and causing millions of job losses, is roaring back.

Trump this week has repeatedly dismissed the threat of the pandemic, claiming that his rivals and the news media would cease paying attention to it after the election, even as his counterparts in Europe scrambled to respond to the disease's resurgence this fall.

In the weeks leading up to the 2018 midterm congressional elections, Trump himself drummed up what he described as a national security crisis, fixating on caravans of migrants approaching the U.S.-Mexico border. He dropped the issue after a resounding Republican defeat that gave Democrats control of the House of Representatives.

Following his own bout with coronavirus, the president has conducted a hectic campaign schedule in the days leading up to the election, holding as many as three rallies a day in different states, while Biden has taken a more measured tack - even spending two days this week close to his home base of Delaware.

More than 76.5 million people have cast early in-person and mail ballots, according to data compiled by the U.S. Elections Project at the University of Florida. That is a record-setting pace and more than 53% of the total 2016 turnout.

In a significant setback for Republicans in two battleground states, the U.S. Supreme Court on Wednesday declined to block extensions for receiving mail-in votes in Pennsylvania and North Carolina. Trump has made unfounded claims that voting by mail, a common practice in U.S. elections, leads to widespread fraud.

Trump plans to return to the Midwest on Friday, campaigning in Michigan, Wisconsin and Minnesota. In all, he plans to visit 10 states in the last week of the campaign and will host 11 rallies in the final 48 hours, a campaign official said.

After a briefing from public health officials on Wednesday, Biden slammed what he called the Trump administration's disregard for safety and failure to develop a plan to contain COVID-19.

"The longer he's in charge the more reckless he gets," Biden told reporters, before casting his own vote in Wilmington, Delaware.

Trump, who continues to downplay the threat posed by the virus, has accused Biden of wanting to institute new lockdowns across the nation that would further damage the economy.

President Donald Trump will hold two campaign rallies on Wednesday in the battleground state of Arizona, where polls show him narrowly trailing ...
News
1 year ago

In the battleground state of Pennsylvania, the Philadelphia prosecutor issued a stark warning for Trump campaign poll-watchers not to overstep their bounds as they search for voter fraud. The Trump campaign has said it is recruiting an "army" of 50,000 volunteers to monitor polling places, an effort Democrats say could suppress the vote.

"Keep your Proud Boys, goon squads, and uncertified 'poll watchers' out of our city, Mr. President," Democratic Philadelphia District Attorney Larry Krasner said in a statement. "Break the law here, and I've got something for you."

If Trump does appear to be interfering with vote counting or manipulating poll results after Election Day, dozens of activist groups who claim to represent millions of Americans from both political parties plan to hit the streets in protest.

The "Protect the Results" coalition of over 130 groups, from Planned Parenthood to Republicans for the Rule of Law, has about 400 events https://protecttheresults.com planned to date.

"We can't assume that Donald Trump will respect the peaceful transfer of power," said Sean Eldridge, the founder and president of Stand Up America.