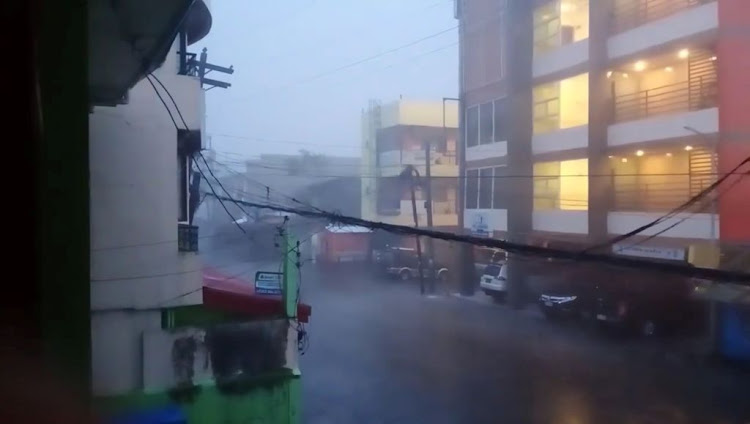 A super typhoon barrelled into the southern part of the Philippines' main island of Luzon on Sunday, bringing “catastrophic” violent winds and intense rains with two landfalls so far, the weather bureau said.

Typhoon Goni is the world's strongest storm so far this year, gaining further strength with 225kph (140 miles per hour) sustained winds and gusts of up to 310kph (190mph).

Philippine authorities evacuated nearly a million people to safer ground before Goni approached the eastern provinces and made landfall in Catanduanes and Albay in the Bicol region.

The weather bureau said “catastrophic violent winds and intense to torrential rainfall” were expected to prevail over Bicol provinces as well as portions of Quezon, Laguna and Batangas, south of the capital Manila.

“This a particularly dangerous situation for these areas,” it said in a bulletin at 0000 GMT.

The capital Manila was also in the projected path of Goni, the 18th tropical storm in the country.

Philippine officials on Saturday ordered the evacuation of thousands of residents in the southern part of the main Luzon island as a category 5 storm ...
News
1 year ago

Between 19 million and 31 million people could be affected, including those in danger zones, the disaster management agency said.

Storm surge alerts have been issued, while officials have also reminded those in evacuation centres to observe social distancing as the coronavirus spread is also a concern.

Dozens of international and domestic flights have been cancelled as the civil aviation authority ordered a one-day closure of Manila's main gateway, the Ninoy Aquino International Airport.

Goni is among the strongest typhoons to hit the Philippines since Haiyan, which killed more than 6,300 people in 2013.

It follows Typhoon Molave, which hit the Philippines last month killing 22 people, mostly through drowning in provinces south of Manila.

At least 26 fishermen were missing at sea as one of the strongest typhoons in two decades tore into Vietnam's central coastline on Wednesday, ...
News
1 year ago

After surveying the typhoon damage suffered by his impoverished country, North Korean leader Kim Jong Un told party loyalists they would have to ...
News
1 year ago