Biden predicts a win, promises to unite as Trump goes to court 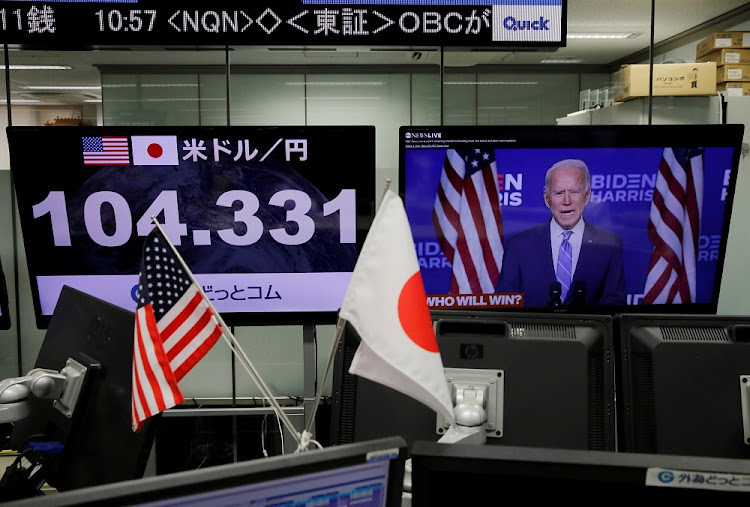 Monitors show the Japanese yen exchange rate against the US dollar and news on Democratic US presidential nominee Joe Biden at a dealing room of the foreign exchange trading company Gaitame.com in Tokyo, Japan November 5, 2020.
Image: REUTERS/Kim Kyung-Hoon

Democrat Joe Biden on Wednesday predicted victory over President Donald Trump after winning two critical US states, while the Republican incumbent alleged fraud, filed lawsuits and demanded recounts in a race yet to be decided a day after polls closed.

While stopping short of declaring victory, Biden launched a website for a transition to a Democratic-controlled White House. His team called it buildbackbetter.com and declared "the Biden-Harris Administration can hit the ground running on Day One."

As Trump spent part of the day airing grievances over Twitter, Biden pledged to govern as a unifier if triumphant.

"What brings us together as Americans is so much stronger than anything that can tear us apart," Biden, appearing with his running mate Kamala Harris, said in his home state of Delaware on Wednesday.

At the moment, not including Wisconsin, where the Republican Trump has demanded a recount, Edison Research gives Biden a 243 to 213 lead over Trump in Electoral College votes, which are largely based on a state's population.

A former vice president with five decades in public life, Biden, 77, was projected by television networks to win the Midwestern states of Michigan and Wisconsin, a boost to his hopes of entering the White House on January 20.

Trump, 74, who won both states in 2016, now has fewer options to secure a second four-year term. He hopes to avoid becoming the first incumbent US president to lose a re-election bid since George H.W. Bush in 1992.

As US President Donald Trump and his allies flooded social media on Wednesday with false claims of victory and unsupported allegations of voter ...
News
1 year ago

Weary from one of the most bruising US presidential races in modern times, Republican and Democratic voters alike were in a state of high anxiety on ...
News
1 year ago

Trump's campaign fought to keep his chances alive with the demand for a Wisconsin recount as well as lawsuits in Michigan and Pennsylvania to stop vote counting. Michigan Secretary of State Jocelyn Benson called his team's lawsuit "frivolous."

While fighting to stop the count in states where he feared losing, Trump blasted news organizations that projected losses in Arizona and Nevada, two states he thought he should be winning. He tweeted his consternation over mail-in voting.

"They are finding Biden votes all over the place -- in Pennsylvania, Wisconsin, and Michigan. So bad for our Country!" he posted on Twitter.

Voting concluded on Tuesday night, but many states routinely take days to finish counting ballots, bolstered by a surge in mail-in ballots nationally because of the coronavirus pandemic.

Trump held a narrow lead in North Carolina, while his lead dwindled in Georgia, and Biden led in Arizona. Should he win Arizona, Biden would be only the second Democratic presidential candidate to win the state in 72 years. Trump won it in 2016.

Trump supporters in Arizona gathered at the state Capitol to rally for the president. Protesters wrapped in American flags chanted, “count the votes!” and “stop the steal!”

In Pennsylvania, Trump's lead dropped to around 164,000 votes as officials gradually worked their way through millions of mail-in ballots, which were seen as likely to benefit Biden. Trump campaign manager Bill Stepien called the president the winner in Pennsylvania. Biden said he felt "very good" about his chances in the state.

Legal experts had warned the election could get bogged down in state-by-state litigation over a host of issues, including whether states can include late-arriving ballots that were mailed by Election Day. Both campaigns marshaled teams of lawyers to prepare for any disputes.

If victorious, Biden will face a tough battle to govern, with Republicans appearing poised to keep control of the U.S. Senate and likely block large parts of his legislative agenda, including expanding healthcare and fighting climate change.